Developing Arizona Cardinals Story: Anquan Boldin is Not in the Mood to Celebrate

Share All sharing options for: Developing Arizona Cardinals Story: Anquan Boldin is Not in the Mood to Celebrate

If you watched the game yesterday, you saw Anquan Boldin, a fan favorite, in a 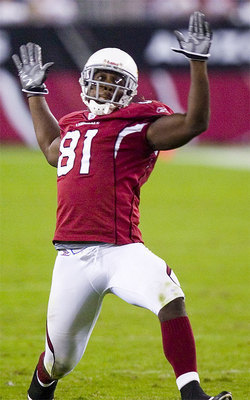 yelling match with Todd Haley, Arizona Cardinals offensive coordinator, during the 4th quarter drive in which the Cardinals eventually took the lead. It wasn't immediately know what the argument was about but Haley said after the game that it was just a heat of the moment type of thing and down played the idea of it being a big story.

Well that may not be the case at all. I didn't notice it at the time yesterday, (although Andrew mentioned it in the previous thread) but Boldin skipped all of the post game festivities. He left the field before the trophy was ever presented and he chose not to celebrate with team mates or fans and he had already left the locker room by the time the media was allowed access. No one is reporting exactly what ticked off Q, but it's being speculated that it could have been being replaced by Breaston on a play during that 4th quarter drive, or the play calling that resulted in mostly one receiver formations or even that he was simply upset about watching Fitzgerald have a huge game while he had just four receptions for 34 yards. Whatever the aggravation was, we'll definitely be hearing more and more about what went down and how everyone is handling it. As Darren Urban points out, the media presence during Super Bowl week will be exhaustive so we certainly haven't heard the last of Boldin's actions.

So what do you make of Boldin's decision to leave the field and locker room? Does this change you opinion of him as a player or team mate or is just an passionate guy who wears his emotions on his sleeve?