Arizona Cardinals Defense Must Slow Down the Falcons' Triplets

Share All sharing options for: Arizona Cardinals Defense Must Slow Down the Falcons' Triplets

The Atlanta Falcons went through unprecedented turmoil last season, including seeing their starting quarterback/face of the franchise go to prison and their head coach leave mid-season, and they ended up as one of the worst teams in the NFL during 2007. This season was supposed to be similar with a rookie quarterback, a rookie head coach and a newly signed running back who would be a starter for the first time in his career. Instead of struggling though the Atlanta Falcons flew to an 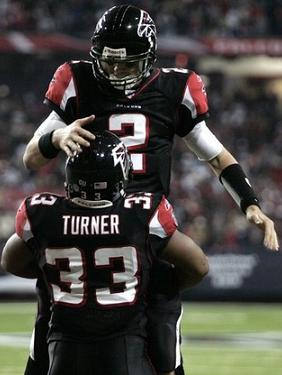 11-5 record and are in the playoffs for the first time since 2004. When the Falcons travel west to face the Arizona Cardinals, the burden will be on the offense to put some points on board and most of that burden will fall on three players, triplets if you will: Matt Ryan, Michael Turner and Roddy White.

Matt Ryan has been everything that the Falcons could have hoped for and more this season. He's passed for over 3,400 yards, completed over 60% of his passes and only turned the ball over 12 times (11 Ints and one fumble) all season. He's taken every single snap for the Falcons this season while passing for 250 yards or more five times and has had five games in which his yards per attempt has been 10 yards or more. His biggest contribution to this team though has been his quick decision making and ability to protect the football. The trio of Joey Harrington, Chris Redman and Byron Leftwhich combined to throw 15 interception and be sacked 47 times last season but Ryan's lowered those numbers to 11 and 17, respectively. Here's a quick scouting report on Ryan from Dave the Falconer, of The Falcoholic:

Matt Ryan is no mere rookie quarterback. He remains calm through most situations, rolls out well to avoid the pass rush and throws darts all over the field. It's his pocket presence that has really made Ryan a successful rookie. Against the Cardinals, he's likely to lean on Roddy White and Michael Jenkins heavily as he's done much of the year. Ryan's greatest weaknesses are his sometimes questionable decision making, especially on passes into coverage, and his tendency to overthrow some of his passes. If he's on his game, he'll do very little of either.

Traditionally defenses try to confuse rookie quarterbacks with unique looks and exotic blitzes but does that same philosophy work with Matt Ryan? In games that he's struggled (1st meeting with TB and CAR, PHI, MIN and STL), which include three of the team's five losses, he combined to complete 49.1% of his passes for 889 yards, four touchdowns, six interceptions and he was sacked 11 times. So what was the difference? Well whether or not it made a difference, four of those games were on the road. Outside of that, it's obvious that most of his sacks came in these games and they included more than half of his interceptions. Conclusion? The Arizona Cardinals need to put pressure on Matt Ryan. Clancy Pendergast is considered, in some circles, as a good young defensive mind and the Cardinals need him to devise a game plan that can put some pressure on Matt Ryan to disrupt him timing and make him uneasy in the pocket.

Fast Fact: The Atlanta Falcons are 5-5 when Ryan is sacked at least once, but 6-0 when he isn't.

Bonus Fast Fact: The Falcons offense averaged 31 points per game when Ryan wasn't sacked but just 20.3 ppg when he was sacked at least once.

Check out the rest of the triplets after the jump......

Michael Turner was one of the bigger free agent signings last off season but not even the biggest Falcon-homer could have predicted that he'd break the franchise record with 17 touchdowns and just under 1,700 yards rushing. The Falcons went from 26th in rushing yards per game in 2007 (95.0) to 2nd this season (152.7), thanks to Turner's breakout season. He started the season with up and down performances that included games of over 200 yards followed up by just 42 yards. Through the first seven games, he had three games over 100 yards and four games under 60 yards, but as the season progressed he become more consistent and more productive. Through the final nine games he averaged 116 yards per game with a low of 61 yards and a high of 208. Turner was not only productive though, he was the definition of a workhorse back with 377 carries on the season, including eight games with 25 carries or more. Here's what Dave the Falconer had to say about Turner this season:

Michael Turner is unstoppable. Early in the season, many of us questioned whether he could only run against defense which collectively put their helmets on backwards, as he seemed to slow down against quality defenses. While that remains a factor to some degree, Turner is a bruising back with surprising speed who is very comfortable running through the heart of the line. In goal line situations, that combination makes him remarkably effective. Turner isn't much of a pass catching back, but he doesn't have to be. The Cardinals will need to get a particularly strong effort from their front seven to keep him under 100 yards, or he'll control the tempo of the game. 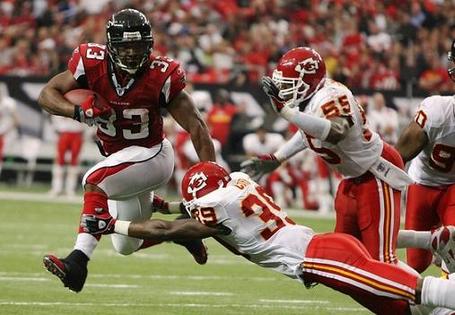 It's clear that Turner and Falcons can run the ball with the best in the NFL. The Cardinals though have seen their fair share of top rushing attacks considering that they've faced six of the top ten rushing offenses in the league this season, with varied results. They held the Giants and Jets to under 90 yards rushing but also allowed the Patriots to gain 183 yards and the Vikings to rack up 239 yards. The Cardinals will obviously have their hands full, but they've slowed down great running teams this season and if they maintain gap control and get a good game from Adrian Wilson in run support, they can keep The Burner from running rough shot over them. If they can slow down Turner, it'll be up to a rookie quarterback to carry the offense and so far this season, that hasn't been a recipe for success.

The last but certainly not least of the Falcons' triplets this season has been Rowdy Roddy White. He set a franchise record this year with 1,382 yards this season and he caught seven touchdowns. To say that White is Ryan's favorite target is a bit of an understatement considering that 56% of his passes go to White. He threw 148 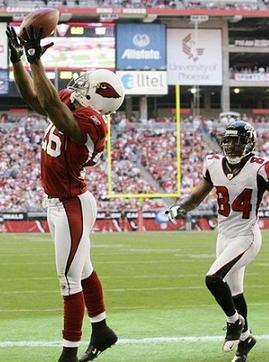 passes in White's direction and second on the team in terms of 'targets' is Michael Jenkins with 81. White is obviously Ryan's security blanket and he's a good mix of size (6'0 208) and speed, although he's more of a down field threat than he is a possession receiver. Here's what Dave the Falconer had to say:

Roddy White is having one of the best two season stretches in team history. The once chronically dropsy receiver has struggled at times with his old problem, but he's also busted the team record for receiving yards in a season and offers a great target for Ryan. His speed and size have always been touted, but it's only in these last two years that the light bulb went on for White when it comes to route-running. He'll challenge Rod Hood all game long.

Just to clarify, I'd be surprised if they locked Hood up on White. DRC has played much better in recent weeks and Whites speed would match up better the rookie.

White is a receiver that can hurt a defense at any point in the game because he's got the speed to simply run by a defender and the shiftiness to turn a short pass into a long, long touchdown. He's had four receptions of 40 yards or more and 69.3% of his receptions end up in first downs. Whoever the Cardinals decide to lineup over White, they'll have to play a smart game and get help from the safeties at times. The Falcons will try some double moves on play action passes and DRC and Hood will have to concentrate on smothering White and leave the run support to someone else.

Fast Fact: As you'd expect, White has better numbers in Falcon's losses with an average of 105 yards per game. He averages just 77.6 yards per game in their 11 wins.

Well that was obviously a long-winded breakdown the three members of the Falcons' offense but these big three with play significant roles in Saturday's showdown with the Cardinals. How well the Cardinals handle this trio could very well be the deciding factor in a game that will end someone's season. Who worries you the most? How would you handle the triplets?