Share All sharing options for: Breaking Down the 'Gadget Play' That Put the Arizona Cardinals Up 14-3

When the Arizona Cardinals hired Ken Whisenhunt, he was well known for his 'gadget plays' and offensive coordinator Todd Haley is certainly not scared of taking a little risk himself. So far during the post season, the Cardinals have pulled out at least one 'gadget play' every game and today we look at the throw-back pass from JJ Arrington to Warner to Fitzgerald that resulted in a 62 yard touchdown.

Before we break the play down though, there's been a lot of talk about how this play was developed and called. Haley explained to ESPN radio yesterday that the play was orginally designed by now Saints head coach Sean Peyton, when the two of them were in Dallas as assistant coaches. He went on to say that they play was specifically designed for a certain set that the Eagles run and that they had run it a couple of times when Vinny Testevarde and Keyshawn Johnson were with the Cowboys. In fact the play is called "Philly Special." Luckily for the Cardinals, Haley brought the play with him when he left the Cowboys and called it at the perfect time on Sunday against the Eagles. Or did he call it? According to Haley, he told 3rd string QB Brian St. Pierre to "be ready" because he'd be the one who would decide when to unviel the play during the game. Haley went on to say that during a TV timeout, they had the right personnel on the field and he was seriously thinking about calling the play when St. Pierre tapped him on the shoulder and simply said "Philly Special." The rest, as they say, is history...

The Cardinals open in a running formation with two tight ends, one WR (Fitzgerald of course) and an off set I-formation. This is the first play of the drive, if you can call it a drive, and the Cardinals offense is set up at their own 38. 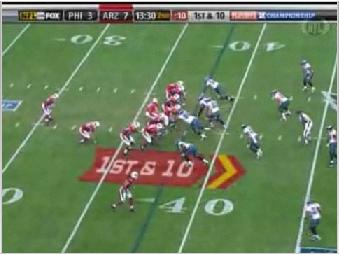 As the ball is snapped the running back, JJ Arrington swings to his right simulating  a toss-sweep and the offensive line looks like they're zone blocking. The fullback Terrelle Smith look like he's leading the way and looking for a big block while Fitz is cutting across the field, seemingly looking to pick off a linebacker or safety. Everything to this point looks like a running play to the defense. 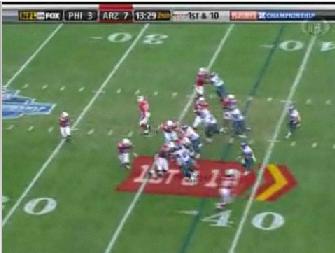 As Arrington gets to the top of the numbers on the field, he pulls up and what looked like a simple toss-sweep is nothing entirely different. You can see at least seven Philly defenders in the picture so not everyone is fooled but they're certainly flowing towards the ball. 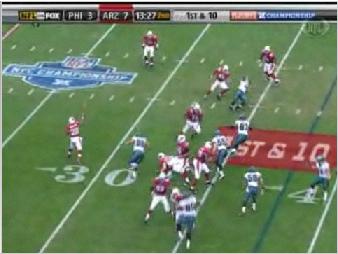 As the throw back is headed to Warner, there will be several Eagles defenders barreling down on him, but he catches the pass cleanly and loads up for deep pass. 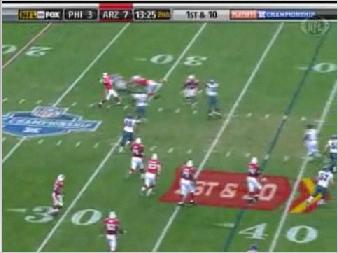 As soon as the screen picks up Fitzgerald and long before the ball gets to him, it's clear that he's one-on-one with a defender and everyone watching in the stadium and on TV had to have known that was good news for the Cardinals and terrible news for the Eagles. (the picture is very fuzzy but I circled the ball) 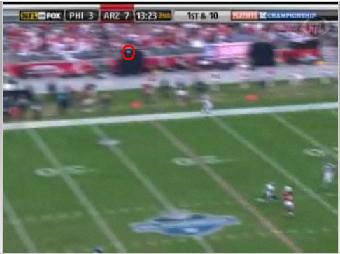 As Fitz goes up and snags the ball, the defender falls down and we all know that Fitz will have no problem bringing the uncontested pass. 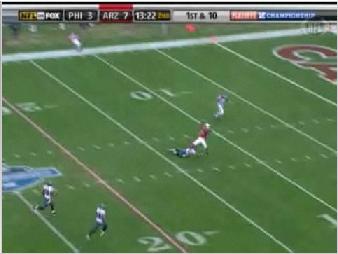 As we know now, the defender tried to trip Fitzgerald up and stop him short of the goal line but it didn't work. The Cardinals would take a 14-3 lead and would stretch the lead to 24-6 before the end of the half. Todd Haley called a great game and had a solid game plan. The greatest attribute of this coaching staff though, might be their ability to trust their players and letting a 3rd string QB call the play is just another example. What kind of trick plays will Haley and Whiz have up their sleeve when they face the Steelers in a couple of weeks?

We'll take a look at the Eagles failed fourth down conversion later today and decide whether to not pass interference was warranted.