Share All sharing options for: The Eagles Failed 4th Down that Sent the Arizona Cardinals to the Super Bowl

Much has been made of the Eagles' final offensive play (no I'm not counting the ill-conceived lateral with seconds left on the clock) and whether or not pass interference should have been called against the Roderick Hood and the Arizona Cardinals. First, I've got two points to make before we get into the breakdown. The play was obviously controversial and there was contact, there no doubt about that, but I also believe that the referee made the correct call. Secondly, the Eagles should have never faced a 4th-and-10. On 3rd-and-10 McNabb had Hank Baskett wide open dragging across the middle of the field. Had McNabb been able to throw an accurate pass, the Eagles would have been facing a much more manageable 4th down or if Baskett makes one guy miss, they could have even got a first down. The first picture is where Basket was in relation to the Cardinals defenders as the ball gets to him. 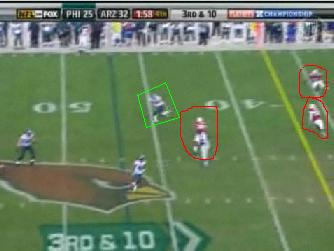 Obviously he would have been able to pick up plenty of yards and be very close to a first down if McNabb would have thrown an accurate pass and led Basket. So where did McNabb end up throwing the pass? This picture is pretty blurry but I did my best to point to where the ball was and the red line shows the outstretched hand of Basket as he tries to reach back and snag the ball. 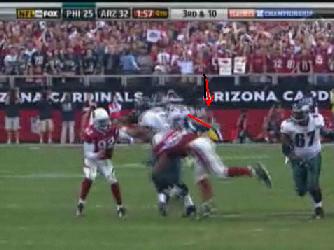 Ok so the McNabb blew an opportunity on third down but what can do on fourth down? First lets look at the formation and I was surprised that I didn't notice how far Hood was off the line when the ball was snapped. 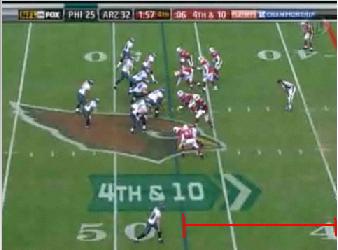 Second it's worth noting that the Cardinals are blitzing seven defenders so you'd think that McNabb would have some options considering that he's got four receivers in route. I was also impressed with how much penetration the Cardinals got. The green line is still the line of scrimmage and everyone of the defenders is at least three yards deep in the backfield when McNabb gets ready to throw. 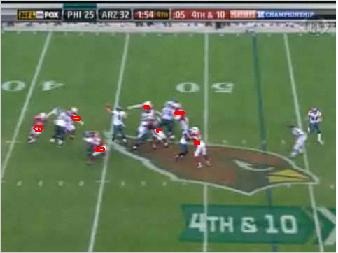 Ok so on to Kevin Curtis and Roderick Hood. We see Curtis starting to go into his break and he's already past the first down marker and Hood is four yards past the marker. 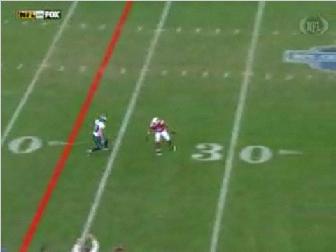 This is the frame that really jumped out at me. First of all, I don't understand why Curtis was past the first down marker with Hood still in his back pedal and Curtis still went another two or three yards before breaking towards the sidelines. I also don't understand why Curtis has his left arm extended towards Hood. That's certainly not helping him make a precise cut. If anything it's slowing him down and he had to go out of his way to do that. So why would he? Because he initiated the contact with Hood the same way that some shooters try to draw a charge in basketball. 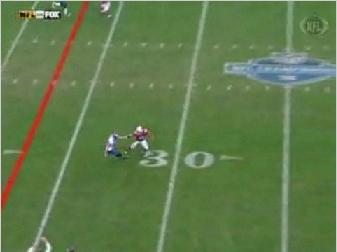 Moving on here's the next frame and Curtis' arm is still extended and it looks like Hood is leaning away from Curtis. Is that because he was pushed away? That's not for me to decide... 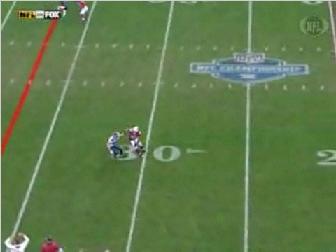 So both guys are now driving towards the ball as it's in the air and Hood almost looks to be in position to make a play on the ball. 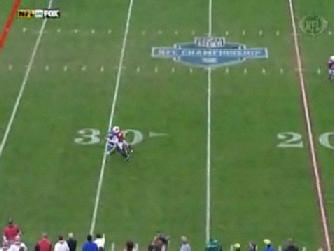 Hood's now falling and you can see his left arm extended and this is where most Eagles fans are crying fowl. 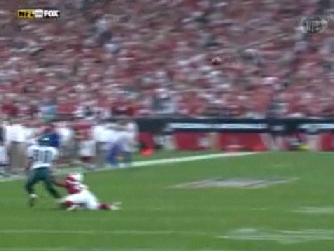 The ball is awful close to Curtis and Hood is still reaching for him. 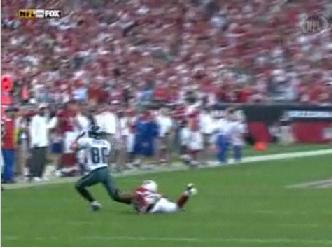 The final shows the ball squarely between Curtis' hands and head. There was definitely some contact from both receiver and defender but in the end, Kevin Curtis had every opportunity to catch the ball and he simply dropped it. 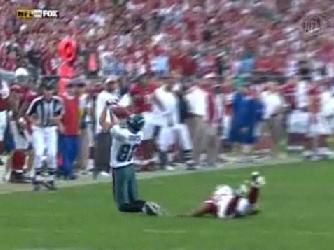 So none of that is inconclusive evidence but I do think it shows that contact was iniated by the receiver and that in the end, he had the opportunity to make the catch. Have refs ever called pass intereference for that much contact or even less? Of course they have, but in such a critical point in the game they made the right call. What do you think? Did Hood commit pass interference? Would the call have been different if the game was played in Philly (as I've heard speculated by some)?