Will the Results of the Super Bowl Effect Kurt Warner's Decision to Retire or Resign With the Arizona Cardinals?

Share All sharing options for: Will the Results of the Super Bowl Effect Kurt Warner's Decision to Retire or Resign With the Arizona Cardinals?

Much of the early Super Bowl talk has centered around Kurt Warner and how he'll need to have a very good game for the Arizona Cardinals to emerge victorious. That talk normally leads into whether or not Warner is Hall of Fame worthy and how a 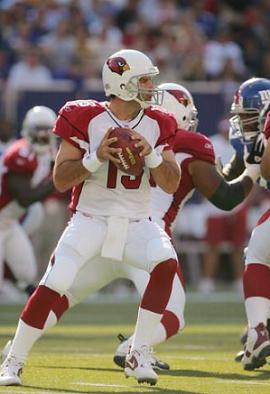 second Super Bowl ring would effect his legacy. We'll cover his Hall of Fame chances sometime after the Super Bowl, but for now the bigger issue, at least in my opinion, is whether or not the result of the Super Bowl will be the deciding factor when he weighs the idea of retirement. We all know that Warner admitted that he considered retirement after Boldin's injury against the Jets and he's also admitted that he's unsure if he'll retire after this season or come back to the Cardinals, or another NFL team. So will next Sunday's result be the deciding factor?

Warner's not a guy who will hang on to a career once his skills start to slip and I don't see him going into any job without the guarantee of being a starter, so both of those are both precursors to him resigning with the Cardinals. I also don't see him leaving Arizona for another team because he's a family man at heart and he's stated in the past that he doesn't want to move them again. With all that being said if the Cardinals pull off a win, I'd expect Warner to announce his retirement on the podium (ala Jerome Bettis). A second Super Bowl trophy would cement his legacy and the story lines around this improbable run would be something that he could never top.

If the Cardinals lose though, I'm not sure what would be going through Warner's mind. If they get blown out and he has a "Jets-type" game, will that be enough to shame him into retiring or will it inspire him to come back and give even more next year? If the Cardinals lose a nail-biter and he plays fantastic will he be tempted to come back because of how close this team would be next year or would he feel like he'd done everything he could and it just didn't work out? I also wonder if his relationship with Leinart effects his decision. He's stated in the past that he respects Matt and that he thinks he's ready to be a starter, but would Warner end his career so that Leinart can start his?

Also, will the outcome of the game effect the Cardinals desire for Warner to return?