Could Todd Haley Have Been the Steelers Offensive Coordinator Instead of the Arizona Cardinals?

Share All sharing options for: Could Todd Haley Have Been the Steelers Offensive Coordinator Instead of the Arizona Cardinals?

When Ken Whisenhunt and Russ Grimm came to the desert from Pittsburgh we all knew that the franchises would be linked together for the forseeable future. Coaches always have a way of bringing some players from their former team and that was no different for the Whiz and Grimm. In two years time the Cardinals have added several former Steelers including Brian St. Pierre, Clark Haggans, Jerame Tuman and Sean Morey among others, but the Arizona/Pittsburgh connections don't stop there. Offensive Coordinator Todd Haley has his own ties to the Pittsburgh Steelers and his ties, are family ties.

Todd Haley's father, Dick, was not only a player for the Steelers for four seasons in 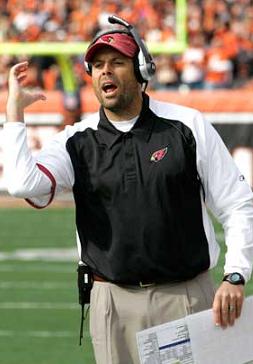 the early 60's, he also became the director of player personnel for the Steelers for 20 years. Dick's crowning achievement was the 1974 draft that produced four Hall of Fame players including Jack Lambert, Mike Webster, John Stallworth and Lynn Swann. Todd's childhood and adolescence was filled with trips to the Steelers' facilities, training camp and even games. Todd was a ball boy for the team until he left for college and he and his father regularly went over scouting reports and studied game film together. Todd still thinks fondly of those days and the Steelers:

''I lived and died with the Steelers,'' he said. ''When your father is part of the organization, it's different than a fan. Those are incredible memories that will never go away, and to this day, when I see a Steeler highlight from the '70s, my eyes will get watery. That has a piece of my heart forever.''

If Haley would have taken the WR job with the Steelers in 2004, would be manning the sidelines right now as the Steelers offensive coordinator? Thankfully we'll never know but in a game filled with storylines, the Haley's are doing their part to add flavor. What do you think of Haley as an offensive coordinator and his chances to be a head coach? And to all of our Steelers fans lurking out there, would you rather have Haley right now instead of Arians?

Our fellow Steelers blog, Behind the Steel Curtian, has story posted on the Haley as well and it's compete with quotes from Steelers owner Art Rooney Jr., who knew Dick Haley and remember young Todd back in day.