A New Feeling in the Valley

Share All sharing options for: A New Feeling in the Valley 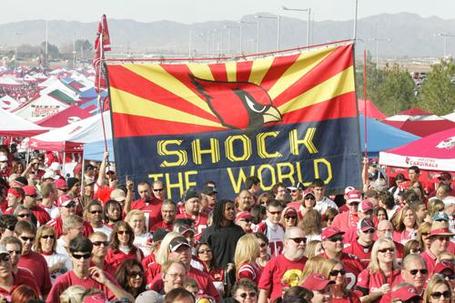 There's an unusual feeling in the desert. It's a feeling that has frankly, never been felt before. The Arizona Cardinals are in Super Bowl 43. Say that a few more times. Everyone with a little NFL knowledge knows it doesn't sound right. Not only have they never been here before, but they hadn't made the playoffs in 10 years, hosted a playoff game in 61 years, or EVER been in an NFC Championship game before. They snapped all those droughts this year and are headed to Tampa Bay, Florida to face the Pittsburgh Steelers.

Cardinals arrived in 1988. Before the Cardinals arrived, this town was split. The majority of fans were either Cowboy's fans, Raider's fans, or 49er's fans. Then the Cardinals came to town. Before this year, they had one winning season and 1 playoff win in the state of Arizona. They've been a horrible franchise that's averaged 5.7 wins per season since 1988. We've had our share of great players leave and high draft picks become busts. We've had blowouts, heart breaks and coaches even break down after some of the worse collapses (See Dennis Green post game rant after Cardinals 24-23 loss to Chicago Bears). Even after two decades of consistent losing, the team was able to crawl out of the basement of the NFL and climb to the grandest stage. To do that, it took time. A brand new state-of-the-art stadium was built. A new logo, along with improved jerseys were created and most important of all, a coach with a passion was brought to town. In a short two years, Ken Whisenhunt turned this bus around and is now headed in the right direction.

After being a die-hard fan of the Cardinals for the last  6 years, I've noticed a lot of change in the valley. There were times when I felt like I was all alone in supporting this team. People would laugh or "hate" when I told them the Arizona Cardinals were m 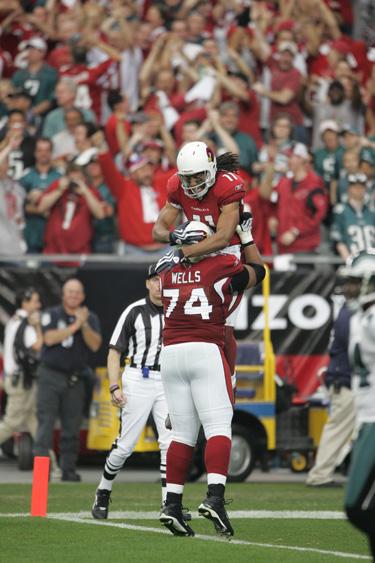 y team of choice. Many of my own friends and family were in support of other teams, and showed their disgust for the Cardinals franchise. After this year though, I've noticed a change. Never before have I walked around my work or a mall and seen so many people wearing Cardinal's jerseys or hats. A perfect example of this was Sunday as I was driving home along the freeway (not even close to the Cardinals stadium) and I noticed numerous cars with Cardinals flags and stickers on them. Inside were people wearing Cardinals jerseys and hats. Obviously they were coming from the game, but the fact that I saw so many proud fans made me feel good. I even saw some waiving to each other screaming "Go Cardinals!", on the freeway. Another example took place after the Cardinals beat the Carolina Panthers in the divisional round when I went to the movies after the game. I was wearing my Cardinals sweater and beanie, and I remember the cashier in the theatre ask me if the Cardinals had won. Of course I told him, and his response was "Dude that's crazy, there doing so good right now. I cant believe it". I could tell this guy didn't know much about the team but it was nice to hear. It finally feels as if Cardinals and their fans have received some respect. I can't tell you how many congratulations texts I received after the Cardinals beat the Eagles. Just look at all the respectful posts we received on RotB. This whole season feels like a dream and it hasn't hit me yet that we are actually in the Super Bowl. I saw a phone interview with J.J. Arrington on ESPN on Monday morning. He acknowledged that they were in the Super Bowl but he doesn't feel that way. You could say I feel the same and I don't imagine that it will hit me until kick off on February 1st.

This is a sight that I have never seen and I hope will continue to see for years to come. The fact that the tickets for the NFC Championship sold out in six minutes tells me that the fans are turning in Arizona. This town is becoming a football town and that is a good feeling. It's no longer a basketball town. We have football team that has earned respect and fans that support them. As Ken Whisenhunt would say, and as corny as it sounds, "We do this together!"