Share All sharing options for: A Look Back at 1944 When the Arizona Cardinals and Pittburgh Steelers Combined for a Terrible Season

It's inconcievable to think of two NFL teams merging for a season in this day and time, but in the early days of the NFL, it happened a couple of times. War was the culprit most of the time and in 1944, as World War II raged on, the league was between a rock and a hard place. In the previous season they had merged the Steelers and Eagles, at the Steelers request, and with that merger undone and two teams re-joining the league they were left with 11 teams. Making a schedule with an odd number of teams isn't an easy task by any means so the league again turned to the Steelers with the idea of a merger, this time at their request. Art Rooney, the Steelers owner, obligned and after a couple of suggested teams were rejected, the Steelers agreed to join forces with the Chicago Cardinals. For a bit of background before we move on, the Cardinals (as you might expect) were not the pillar of success in those days. They'd won 11 games in previous six seasons (including a winless '43 season), but the Steelers weren't all that great in those days either. They had some success in '42 and '43 ('43 was the 'Steagles' season) considering that they were 12-8-1, but from 1933 to 1941 they managed just one .500 season and averaged just under 3 wins per season. As it turns out the marriage between the Cardinals and Steelers turned out to be season that both parties would just assume forget. 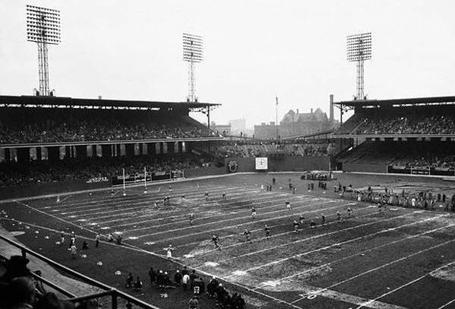 The '44 team that ended up being called "Car-Pitts" (for a reason that we'll get to later) was bad enough that the Steelers co-owner Bert Bell called them the "worst team he'd ever seen" and he said that after the first exibition game. The regular season opened with a game against the Cleveland Rams and in what be microcosm of a depressing season for the "Car-Pitts" they'd squander a late fourth quarter lead (28-23) in embarrassing fashion: 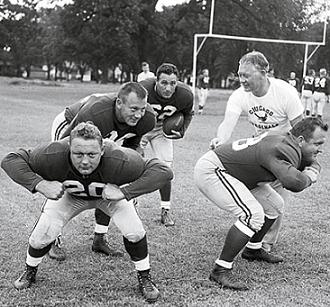 With four minutes left, Card-Pitt's Bernie Semes intercepted a Colella pass at the goal line and fell forward to the one-yard line. At this point Card-Pitt, seemingly in command of the game, had several options. They simply could have run their offense and taken time off the clock. Or, worried about operating in the shadow of their own goalpost, they could have taken a safety and backed up the Rams with a free kick. However, Handler and Kiesling (Card-Pitts co-coaches) made the fateful decision to punt immediately, on first down. Apparently, they didn't want to risk a turnover near their own goal line. But what happened next was just as bad. In what would become a leitmotif of the season, Johnny Martin shanked a nine-yard punt, and the Rams took over first-and-goal. Three plays later Albie Reisz found Benton for the winning score. Cleveland won the game 30-28, and Card-Pitt had blown what would be its best chance all year to win a game.

As you can tell by the last sentence, the Card-Pitt's wouldn't win a single game all season and after the first game, the average margin of defeat was 24 points. The season was marred by coaches fining players for 'indifferent play,' players refusing to practice, brawls on the field that had to be broken up by police and players litterally quitting the team. Local newspaper writers took to calling the team "Car-Pitts" (carpets), because everyone walked over them.

The final season stats seem almost impossible to comprehend. They still hold the record for lowest punting average (32.7) and they missed 11 of 15 extra points. Five different players threw passes that season, but none of them had much success. They'd combine to complete just 31% of their 258 attempts while throwing eight touchdowns and 41 interceptions. The two teams agreed to split again a day after the season ended with both teams vowing to never merger with any team again. The Cardinals would go on to win one game the following season, finishing a brutal three year stretch when they're combined record was 1-29, but in 1946 they started to show some promise (finishing 6-5). The '46 season was led by a new coach, Jimmy Conzelman, and he led the Cardinals to the only title in franchise history in 1947.

I can't speak for how fans felt back in mid-40's, but I wonder if the hope that they felt with with a new coach and 6-5 is the same way that most Cardinals fans felt last year. Will Ken Whisenhunt have the same success in his second season as Conzelman had during his second year? I certainly hope so, but only time will tell.