With the Super Bowl inching closer and closer, we talk with a couple of other blogs that cover the Arizona Cardinals about what this post season has meant, Larry Fitzgerald, Anquan Boldin and Kurt Warner's Hall of Fame chances. The other two blogs who participated in the Q&A were Fanster, which covers all sports in the Pheonix area, and Raising Zona, another great blog dedicated to all things Cardinals. We should have another installment later this week but for now, here's what we came up with:1st Down:

What exactly does the Cardinals' Super Bowl run mean to you?

Fanster.com's Greg Esposito: Vindication. That is what this Super Bowl means to me as a Cardinals fan. After years of being the doormat of the NFL, it is an amazing feeling to finally know how the other half lives. It's even better that no one expected this of the Cardinals and they were able to shock the world. Nothing like success as the underdog. It's still hard to fathom, but I think I'm starting to get used to the idea.

Revenge of the Birds: Simply historic. I've been trying to put my thoughts together into semi-coherent sentences since Sunday afternoon, but I just can't do it justice. I can't get my head wrapped around the idea that the our very own Arizona Cardinals are playing on Super Sunday. Every time I turn on ESPN or NFL Network and see "Arizona Cardinals in the Super Bowl" I just get a little more giddy and the same teenage girl-type giggling starts.

Raising Zona: Being a fan from day one, and more than most know, it is quite gratifying, yet still amazingly surreal to me that this is happening. I was a ballboy with the team for training camp in 1989 and 1990, seasons 2 and 3. I stuck with them even when ridiculed because they were my hometown team. I'm a native of Phoenix and to see this day come is something quite special to me.

2nd Down: Has Larry Fitzgerald proven himself to be the best receiver in the game? 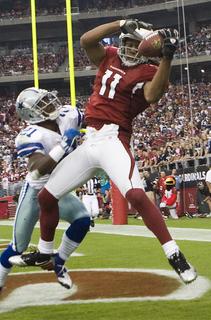 one of the best. The Cardinals do have a guy at the other wide receiver spot that can be as good, if not better than anyone in the league when he is not hurt or arguing with his offensive coordinator. He is most certainly the best wideout of the playoffs, and if he keeps it up during the regular season next year then he will be viewed as the best. It seems like a changing of the guard at the top of the wide receiver list with Chad Johnson and TO's production slipping. It's a prime time for Fitz to move up the list.

Revenge of the Birds: Zero doubt in my mind. I wouldn't trade Fitzgerald for any receiver in the league and I don't think it's even remotely close when you consider that he's still just 25 years old. He's got the best hands in the league and when the ball is in the air no one is better and going up to get it. Couple all that with the fact that he's still getting better as a player and as a leader and this shouldn't even be an argument.

Raising Zona: No doubt, hands down. I always considered him in the top five, however early in the season I could see him slowly vaulting himself to the top. No one has the hands and control he has when jumping up and grabbing a ball. He has tremendous balance in situations that defy gravity and explanation. The guy also happens to be a class act. He really is the whole package.

3rd Down: Is Drew Rosenhaus to blame for Anquan's problems, and how do you solve the situation?

Fanster.com's Greg Esposito: I've said it before I'll say it again, Drew Rosenhaus is to blame for a majority of, if not all of, Anquan Boldin's attitude. Every client Rosenhaus sinks his claws into turns into "the me-first" athlete that finds a way to distract his team. Boldin once seemed impervious to this. Even this season Boldin seemed to put aside his desire to leave the club and just help the Cardinals to win. All of that changed Sunday. While teammates were celebrating, Anquan was sneaking out the back of University of Phoenix Stadium with Rosenhaus. Once you leave a championship celebration to hang out with your agent, you've crossed the point of no return. The transformation is complete; Anquan is about the money and it's Rosenhaus' fault.

Revenge of the Birds: I've gone back and forth on Q all year long. I'm torn because I love to watch him play this game. No one plays with more heart and desire than Q and he plays every single snap like it might be his last. With all that being said, I don't think he deserves Fitz-type money. If he can be happy with a bit more money (maybe bump his salary to 7.5 million a season), I'd love to have him back. If he's dead set on making dollar for dollar with Fitz, then the front office will have to find some way to move him.

I do wonder if Rosenhaus has slowing whispered enough poison in Q's ear that's he turned to the ‘dark side' now, because he certainly hasn't sounded like the same guy that we all grew to love. Either way though this season hasn't helped his case for top dollar.

Raising Zona: I've had several posts on this very issue. I've got a nice little nickname for Mr. Rosenhaus, which I will not repeat here. While I've disagreed with a lot of his antics and the way he has handled his clients, including Anquan, the clients are ultimately responsible for themselves. I don't care how hands on or off an agent is, the player ultimately is responsible for the way things are handled for him. As for solving the situation, it is clear to me Anquan is still looking for a way out by pushing some buttons, however the Cardinals have been steadfast in their attitude on this. He is under contract until 2010 and unless something spectacular is offered in return, don't look for the Cardinals to quickly look to get rid of him. As for Anquan, if he wants to be well represented, he should fire Rosenhaus, but we all know that will never happen.

4th Down: Is Kurt Warner a Hall of Famer?

Fanster.com's Greg Esposito: It's an interesting debate but it's a simple answer. Warner is a Hall of Famer. He is only the second quarterback to take two different teams to the Super Bowl. He is playing in his third Super Bowl overall and won the NFL and Super Bowl MVP awards. Oh, and he is an Arena Bowl champion (it's the Pro Football Halll of Fame, not just the NFL Hall of Fame). Add all that to the fact that he is a feel good story, and he is a shoo-in for voters to elect him to the Hall.

Revenge of the Birds: I've really been trying to hold off on addressing this issue because I think it's a fascinating argument. First, I do think he'll get in eventually but not necessarily because his on the field production warrants induction. He's a great story for the league and he's one of the nicest guys in the history of the NFL (that matters, whether the league admits it or not). If the he can lead the Cardinals to a SB victory, then I think he's a no brainer. If they lose though, I think it gets interesting. He's really only had four or five good seasons in the league, but those handful of seasons were historically really good seasons. On the other hand, his cumulative career stats are not really HOF-worthy. For example, even if he comes back next year and puts up similar numbers (4,500 yards and 30TDs) he'd still rank behind guys like Jim Hart, Jim Everett, Boomer Esiason and Dave Krieg in passing yards and behind Esiason, Krieg and Drew Bledsoe in touchdowns. In the end, I bet he gets in either way, but I can see both sides of the argument.

Raising Zona: Yes. I've heard this debate go back and forth on talk shows, radio programs, television programs, and in general conversation. Listen, I see both sides of the argument. The only valid argument against would be that he really didn't have what most would consider a good season from 2003-2006. However, you have to look at the whole picture. He has now taken his third team to the Super Bowl, attempting his second win. He's an MVP, a Super Bowl MVP and could add another quite possibly, and his career numbers stack up with the best of them. Win or lose in Tampa, Warner, in my opinion, is a Hall of Fame quarterback.

The next installment will focus much more on the Super Bowl itself, but these are certainly some topics that have been on my mind over the past couple of weeks. What are your thoughts and what would your answers have been to the same questions?