Arizona Cardinals Are Finally Running the Football, But What has Changed?

Share All sharing options for: Arizona Cardinals Are Finally Running the Football, But What has Changed?

Heading into the playoffs everyone expected the Arizona Cardinals to live and die by the right arm of Kurt Warner. That seemed like a safe assumption considering that Warner threw for the over 4,500 yards (2nd in the league) and only two QBs threw more times per game, but the offense as a whole struggled down the stretch. The offense finished the season respectably ranked third in points per game and fourth in yards per game, but it was obvious that something was missing. The Cardinals ground game stumbled to the end of the season ranked dead last in yards per game (73.6), attempts per game (21.2) and almost dead last, 31st, in yards per attempt (3.5). So there's no way the Cardinals got any production out of their running game right?

Well not exactly. The Cardinals played musical chairs with the starting running back again and rested and refreshed Edgerrin James has led the way averaging 67.7 yards per game in the playoffs while running game as a whole is averaging 111.0 yards per game. So why are they suddenly so effective on the ground? Let's take a look....

After a quick look at the stats, it's fairly obvious what the difference has been in January. The Cardinals simply dedicated themselves to running the ball and it's paid huge dividends. They haven't been overly successful on the ground, as evidence by the yards per carry actually dropping to 3.3, but they've been persistent about not giving up. They've ran the ball 12 times more per game during the post season, that's a 57% increase for you math majors out there, and it's helped them control the clock and wear down defenses. As a result they've been able to dominate in the fourth quarter of the past three games, averaging over 10 minutes of possession and rushing for 105 of their 333 yards. So you might be wondering, well if it's that simple why didn't they run the ball more often in the regular season? 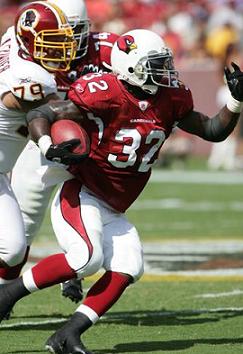 Believe it or not, that answer is just as simple as the last question. The offense, and team as a whole, isn't falling behind early in games. Too often in the regular season the offense would turn the ball over early in games and they'd be forced to throw on nearly every down. Looking at four such games (NYJ, PHI, MIN, NE), the Cardinals were outscored by a combined 117-7 in the first half (ouch) and as a result they averaged just 12 carries per game for under 40 yards in those games. When they were in close games during the regular season, they actually did a pretty decent job of staying balanced.

Running the ball against the Steelers this Sunday will be the biggest test for the Cardinals though. It'll not only be a physical test to move the ball but it'll test their commitment to the ground game. The coaching staff, offensive line and running backs will have to be prepared for minimal gains for most of, if not all of the game. This Sunday it won't be about getting 100 yards or ripping off big runs, it'll be about doing enough to keep James Harrison and LaMarr Woodley from pinning their ears back and painting a target on Kurt Warner's back.

One thing seems pretty clear, the 2008-2009 Arizona Cardinals are definitely built to throw the ball, but they do have the ability to keep defenses honest with some semblance of a running game. As long as they're able to protect the ball early on against the Steelers, they should be able grind out a yard here and two yards there to slow down the blitz-happy defense. We'll take a closer look at the Cardinals offensive line versus the front seven of the Steelers later in the week, but do you think the Cardinals can have any success running the ball this weekend?