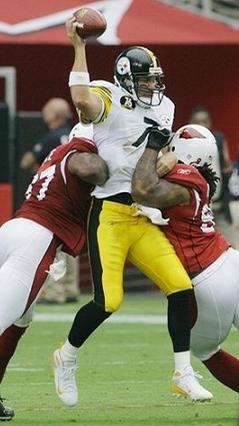 Darnell Docket, Karlos Dansby, Adrian Wilson and company will be facing this Sunday. The Arizona Cardinals defense has been playing inspired football in the post season but they'll have another huge test this Sunday when they meet the Ben Roethlisberger-led Pittsburgh Steelers. The Steelers haven't been a prolific offense this season but Roethlisberger has a knack for keeping the game close and making just enough plays in the fourth quarter to pull out a victory. Five times this season he led drives late in the fourth quarter or overtime to take the lead or tie, including three scoring drives in the final two minutes.

Roethlisberger also has a knack for holding onto the ball though and scrambling around in the pocket looking for the big play down field. While at times that leads to big plays (ala his TD pass to Santonio Holmes last week), it also leads to him taking quite a bit of sacks. He was sacked 46 times during the regular season and another five times during their two post season games. Ben's a big, tough guy though and most of the time he bounces right back, but there have been games when the punishment got to him and affected his play. Five times this season Big Ben was sacked four or more times and those five games resulted in three losses and the offense averaging just 13 points per game. In fact here are some alarming stats for Ben's production and his effect on the Steelers when they can't protect him:

So the moral of the story is simple, get after Ben Roethlisberger. But how?

The Cardinals find themselves in an interesting situation because they beat these Steelers last season and they did it by beating up and harassing Ben Roethlisberger from start to finish. He was sacked three times on his first four drives and he never got on track all day. He finished the game completing just 53%of his passes and he threw two interceptions. The encouraging news for the Cardinals is that they did all of their damage with their defensive line and that they didn't have to rely on heavy blitzes to break through the Steelers' line. Darnell Dockett was the star of the day with 2.5 sacks and a forced fumble while Antonio Smith also recorded a fumble and Bertrand Berry chipped in with half a sack. The most important thing for the Cardinals pass rushers to remember is that Ben will hold the ball too long at 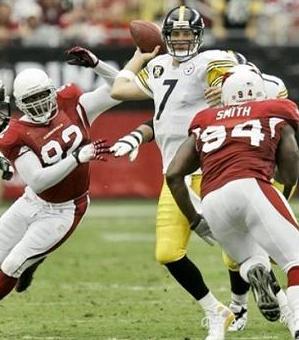 times and they should give up on their pass rush just because it's been four, five or six seconds since the ball was snapped.

You might also be wondering, what's changed since these two teams last played each other? For the Steelers, their offensive line is almost completely different than it was last September. Here's a look at who was there last year and who's in the starting lineup right now:

LT - Marvel Smith out, Max Starks in: Smith was slowed by a bad back last season and he didn't last long this season either. Starks has stepped in and he's played like the guy who started every game for the Steelers' Super Bowl season in 2005. He's not the best pass blocker and he will struggle with speed rushers so don't be surprised if Chike Okeafor is unleashed more than normal this week. (On a side note, if you're hoping that the Cardinals pick up a OT in free agency, keep an eye on Starks. He's a UFA after this season and he's got a history with Whiz and Grimm).

LG - Alan Faneca out, Chris Kemoeatu in: The all-world Faneca left via free agency and Kemo has stepped in and had a decent season in his first year as a starter. Like Starks, Kemo's strong suit is being a mauler in the running game and he can be exploited by quick defensive linemen. He's also had problems picking up line stunts throughout the season so don't be surprised if the defensive line tries some 'twist-blitzes' on passing downs. (Kemo's also a UFA after this season and has history with this coaching staff.)

C - Sean Mahan out, Justin Hartwig in: Mahan was a disaster last year and he was cut in the off season. To fill his spot the Steelers signed Hartwig and the center of the OL has stabilized. Hartwig's not the biggest or strongest guy, but he holds his own and he's the veteran leader on an otherwise young offensive line. If Gabe Watson can command double teams on a consistent basis, it'll free up other guys to beat their man one-on-one.

RG - Kendall Simmons out, Darnell Stapleton in: Simmons went down early in the season, but the Steelers never really missed him. Stapleton reminds me alot of Lyle Sendlein because they are both undrafted, undersized centers, in fact they're almost the exact same size. Stapleton doesn't really do any one thing exceptionally well but he's a well rounded player who uses good technique and intelligence to get the job done.

RT - Willie Colon is still the guy: The only starter who remains from last years game is arguably the worst player on the offensive line. Colon looks like a guard and plays like one most of the time. He really struggles against speed rushers and at times won't even manage to touch his man (ala Terrell Suggs last week). Look for Bertrand Berrry and even Travis LaBoy to give Colon fits, if the Steelers don't give him some help.

A quick review of the current offensive line makes it pretty clear why Roethlisberger takes some abuse. When you pair a QB who likes to hold onto the ball too long and line that struggles in pass protection, the result is normally disasterous. Ben is like most QB's though and if you give him time in the pocket, he can certainly rip up a secondary. He's got a couple of legit speed receivers, an excellent possession receiver, a very good safety valve at tight end and a back who's capable reciever out of the backfield (Mewelde Moore, not Willie Parker). It will be imperative that the Cardinals put pressure on Ben Roethlisberger early and often. Can the Cardinals turn up the pressure with just the front three or four or will they have to send backers and A-dub to get the job done? How many sacks will they end up with?