Share All sharing options for: The Ken Whisenhunt Effect

After the 2006 season, the Arizona Cardinals were lookin 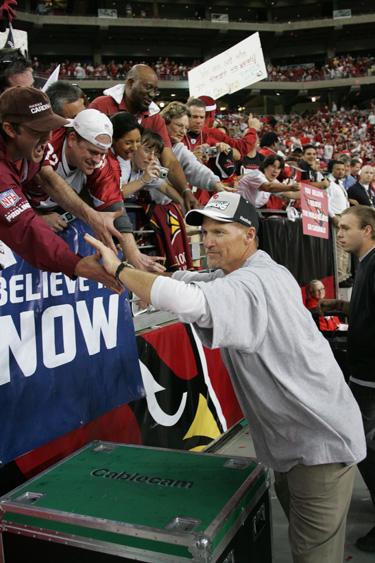 g for something different. They were looking for help in any way they could get it. The answer they found was much more deep then that. On January 14, of 2007, the Arizona Cardinals hired Ken Whisenhunt, a former offensive coordinator of the Pittsburgh Steelers. He was brought in and given the opportunity to hire his own coaches. He gave another Steelers coach, Russ Grim, a chance to join him as the offensive line coach and Todd Haley would serve as the offensive coordinator. He was given a team that had one winning season since being in Arizona and had averaged 5.7 wins per season in that time.Ken received a four year deal and was hoped to establish a winning franchise and a new look in Arizona.

The first year was the building stage. New players were brought in, and so was a new mindset. Some of the early struggles were apparent as the Cardinals were not able to finish games. They lost two critical games to their rival, the San Francisco 49ers and ended their first season under Whisenhunt with an 8-8 record. It was only the 3rd non-losing season since the team had been in Arizona. Even though the Cardinals endured another season not making the playoffs, there was a feeling that this team was headed in the right direction.

Another off season passed and the Cardinals were preparing for the 2008 season. More players were brought in by Whisenhunt to continue changing the teams past culture. One of the first moves by Whisenhunt, was making 36 year old Kurt Warner, the starting quarterback. Many questioned if it was the right move, but as the season started, it was obvious he made the right decision. The Cardinals started off with a 4-2 record and were the top team in the NFC West. The fans of Arizona could tell that change was already here. Whisenhunt had been saying since he arrived that he wanted a smart, tough, disciplined team and it was beginning to look that way. After the strong start, the team endured some late season losses, and  fans and media weren't sure what to call this team. Many believed the Cardinals were "pretenders", and that they were a prod

uct of a weak division. The Cardinals proved many people wrong and after a week 14 victory, the Cardinals were the division champs for the first time since 1975. It would also be their first home playoff game since 1947. There was a new culture forming in Arizona, something most fans weren't familiar with.

As the playoffs approached, many critics were uncertain if the team could handle the pressure and play at a high level. Whisenhunt came out with well thought-out game plans and out-coached the Falcons, Panthers, and Eagles coaches in the playoffs. He led this team to victory on the East Coast when nobody gave them a chance. Not only did the Cardinals win, they won in ways most wouldn't expect. Beating the Eagles gave the Cardinals their first NFC Championship win in franchise history and in only two years, Ken coached the Arizona Cardinals into the Super Bowl...another franchise first. Ken Whisenhunt had established that dominance that he wanted. He created a team that was team first, and not player first. Most importantly they were a team that would play smart and tough football. Only time will tell if the Cardinals emerge victorious in the Super Bowl, but one thing's for sure, Ken Whisenhunt has created a winning team that will continue to play hard every Sunday.

This story was originally written by A. Espindola.