Andrew previewed some key match-ups earlier in the week and asked ROTB what the most important match-up was in the Super Bowl. The leading vote-getter right now is a match-up that we've already broken down in detail (you can read that breakdown, right here) so we'll move on to the runner up. If you haven't voted, follow this link and let your voice be heard.

The Arizona Cardinals know a little something about outstanding, versatile safeties considering that they've had Adrian Wilson on the roster for the past eight seasons, but Troy Polamalu still offers a difficult challenge. Polamalu is a nearly a household name (rare for a safety), but he's more than just hype. He's a five time Pro Bowler, three time All-Pro and he's the rare strong safety who is just as good in coverage as he is around the line of scrimmage. He can line up anywhere just about anywhere in the secondary and he's constantly in motion prior to the snap. His ability to free flow prior to the snap of the ball makes it very difficult for opposing quarterbacks to identify not only what his responsibility is on a given play, but also what kind of coverage the secondary is in. So what can Kurt Warner and the offense do to counter Troy's playmaking abilities and limit his impact on the game? Let's take a look....

Mix Up the Snap Counts: Polamalu is a master at timing the snap count and leaping across the line of scrimmage before the offensive line can react. That ability was on display last week when he leaped over the offensive line and wrapped up Joe Flacco on a fourth down quarterback sneak. He also uses that timing to 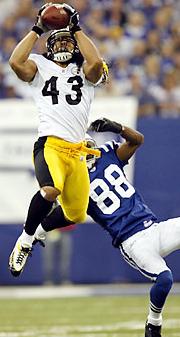 disguise his responsibility on plays. He'll often line up at the line of scrimmage, as if he's blitzing, and then drop into deep coverage as the ball is snapped and visa-versa. Mixing between quick counts and hard counts would force him, and the rest of the defense, to show their hand. So much of his game is built on deception, but if Warner knows where he's lining up and what his responsibility is before the ball is snapped, he might be able to turn the tables.

Force Him the Think Instead of Just React: Polamalu is a borderline reckless player who is at his best going full speed and making plays on the fly. The Tasmanian Devil, as he's affectionately called at times, loves to launch himself into and over the line of scrimmage and leave his feet to make a highlight-reel tackle. He's able to play at such a high level at such a high speed because he's well prepared by the defensive coaching staff and because he's a smart player who tirelessly studies opposing offenses. With that in mind, Todd Haley and Ken Whisenhunt will have to roll out something that Polamalu and the rest of the defense hasn't seem before. They don't have to make his head spin, but a split second of indecision can often make the difference between a huge play or a big loss.

At Least Establish the Possibility of a Running Game: Another reason that Polamula is so great is because he rarely has to worry about the opposing offenses' running game. You might be wondering "wait I thought he lined up inside the box," and you're exactly right. He does line up very close to the line of scrimmage but he's got the advantage of having a fabulous front seven that focuses on the running game. When Troy is around the line of scrimmage he's normally rushing the quarterback. He'll make tackles around the line of scrimmage of course, but his primary focus is putting pressure on the quarterback. That same confidence in his front seven helps him in coverage as well because he doesn't have to worry about biting on play action passes. The Cardinals won't have great success running the ball, but if they can plant a seed that they might be able to run the ball, it might slow down Polamula just enough to hurt them.

With all that being said, it wouldn't hurt to simply avoid throwing in his direction either. Neutralizing a play maker like Troy Polamalu is always a difficult, but there are ways to limit his ability to impact the game. Kurt Warner and the offensive line will have to find Troy prior to each snap. What else can they do to slow do Polamalu? Will any of these ideas work?