If Hines Ward Does Not Play, What Does it Mean for the Arizona Cardinals Defense?

Share All sharing options for: If Hines Ward Does Not Play, What Does it Mean for the Arizona Cardinals Defense?

There's been a lot of talk and speculation on how much, if any, Hines Ward will be able to contribute when his Steelers meet up with the Arizona Cardinals on Sunday. Ward is an amazingly tough player so I fully expect him to attempt to play, but a sprained MCL isn't normally the type of injury that a wide receiver can play through. Cutting and changing direction puts too much pressure and strain on your knees for him to be able to simply play through the pain. So if he's unable to play, what does it mean for the Cardinals defense? 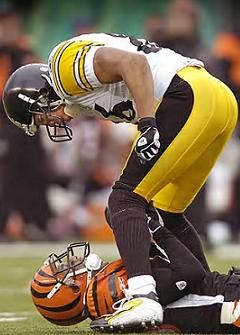 Before we can get into how it would change their defensive game plan, it's worth looking at what Ward means to the Pittsburgh offense. Ward's not the fastest or quickest receiver but he is Ben Roethlisberger's favorite target and for good reason. Ward's caught 65% of the passes thrown his way (no other Steelers' wide out is higher than 51%) and only three players in the league turned more third down receptions into first downs. Not only is Ward the most targeted receiver for the Steelers, he's a force when he doesn't have the ball as well. He's widely considered the best blocking wide receiver in the game and if defenders don't keep their head on a swivel, he'll deliver a knockout blow. On top of his tangible contributions to the game, he's the offensive leader of the Steelers. His ruthless blocking and trademark smile are simply contagious and Big Ben, Santonio Holmes, Willie Parker and the rest of the offense feed off of his enthusiasm. Oh and I've said all of that without even mentioning that he's a 'big game player.' In his 11 year career he's averaged just under 60 yards per game and scored a TD every 2.4 games but in the playoffs he averages almost 80 yards per game and has scored a TD every 1.6 games. So what would the Steelers have left if Ward can't play?

Well obviously it'll change the dynamics of the Steelers' receiving corps. Ward has been responsible for 125 receiving yards in the post season and the other three wide outs, Santonio Holmes, Nate Washington and Limas Sweed, have combined for 166 yards. Since most of us probably don't  have a great idea of what Holmes, Washington and Sweed bring to the table, lets take a quick look at their scouting reports.

Santonio Holmes: In Ward's absence, Holmes would be the #1 receiver and he'd be the closest thing to a complete receiver. That doesn't necessarily mean that he's ready to carry the offense though. Holmes has outstanding quickness and top end speed that allows him to get by almost any defender. He's also got the mentality of a punt returner every time he gets his hands on the ball and the elusiveness to turn every short reception into a long gain. Holmes 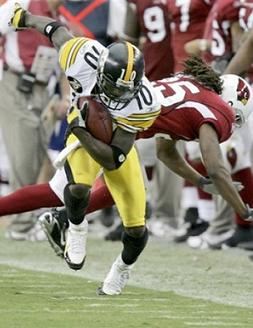 isn't going to out-muscle anyone and he doesn't have the size (5'11 192) to make his living over the middle of the field, but that doesn't mean that he won't run the occasional slant. Holmes burned the Cardinals last year (6 catches for 128 yards and 2 TDs) when these two teams met, but he was covered by Eric Green for most of the day.

Nate Washington: Washington would slip into the starting role but he's not a starting caliber wide out by any means. He's a guy with good top end speed and average quickness, but he's at his best when running straight down the field trying to stretch the defense. He's tall but very lanky (6'1 185) so he won't make many catches in the middle of the field. His biggest shortcoming though is his hands. He's got a history of making a spectacular, circus catch then dropping a routine, perfectly thrown pass on the very next play. He also might have some problems getting off the line if he faces press coverage.

Limas Sweed: The rookie only caught six passes during the regular season and two more in the post season. Unless he makes a big play in the Super Bowl, his rookie season will be remembered for dropping a perfectly thrown deep ball when he was wide open. Sweed has had spotty hands for most of the season but he's got the physical abilities to make plays.

If Ward can't go on Sunday, the Steelers would be left with just this trio at wide receiver. That doesn't sound overly promising for Big Ben and the passing offense but Ben's got a wild card in tight end Heath Miller. Miller is a complete tight end with excellent hands. He may not have the straight line speed to stretch a defense but he would become Ben's primary target on third downs and critical situations in Ward's absence. Mewelde Moore would also take on a bigger role. He's the best receiving back on the offense and can make people miss in the open field. So how would the defensive scheme change for the Cardinals?

Pressure Would Shift to the Linebackers: Holmes, Washington and Sweed are all threats to stretch the field but Roethlisberger will likely look Heath Miller's way more often. He'll also have to rely more on running backs like Mewelde Moore out of the back field for check downs and swing passes. The responsibility to slow down Miller and Moore will likely fall on the linebackers including Karlos Dansby and Chike Okeafor. It'll be their job to make sure that Roethlisberger doesn't extend drives with short passes to his check down options.

Antrel Rolle Must Stay Deep: Without Ward the Steelers have two deep threats and an unknown. Rolle will have to stay deep and not bite on the play fakes that the Steelers have lived on in the post season. He can't allow Holmes or Washington to get behind the defense for a quick score. Roethlisberger has gone deep more often during the post season and the pressure will be on Rolle to play center field and not be fooled.