Share All sharing options for: Bigger Impact in the Super Bowl: Karlos Dansby vs. James Farrior

Defense is a big story line in this year's Super Bowl and for good reason. The Steelers sport one of the best defenses in recent memory and they're capable of completely shutting down even the best offenses. The Arizona Cardinals defense went through a roller coaster regular season but they've turned into ball-hawks in the post season and are a big reason why the Cardinals are the NFC representative.

Both defenses have their fair share of play makers but every good defense is led by a outstanding middle linebacker. For the Cardinals, Karlos Dansby mans the middle and he led the Cardinals in tackles in the regular season and post season. He finished the regular season tied for second on the team in sacks and interceptions and he forced two fumbles. For the Steelers, James Farrior led the Steelers in tackles in both the regular season and the post season and he ended the season with the same amount of sacks as Dansby. Granted both teams don't run the same defense but their production can still be compared to each other. So who will have the biggest impact for their respective teams in the Super Bowl? Let's take a look...

The case for Karlos: Dansby is the 'do-it-all' guy for the Cardinals defense. He's tough enough and strong enough to be very solid against the run and he's athletic enough to make plays sideline to sideline on sweeps and screens. Dansby's best attribute though might be his ability to drop back into coverage and run with backs and tight ends. He's also an above average pass rusher for a middle linebacker and he's got the athleticism to get around backs trying to protect their quarterback. 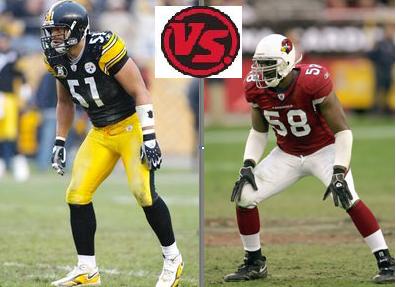 The Case for Farrior: Farrior is the rock in the middle of the Steelers defense. Despite being on the wrong side of 30, he's a force against the run and pass. Having Casey Hampton in front of him ensures that he can flow from sideline to sideline without getting picked up by blockers trying to get to the second level. Farrior can defend the pass but he's better in a zone than covering backs or tight ends man to man. Being able to keep his face to the quarterback though does allow him to read the QB's eyes and break up some passes. Farrior's no stranger to the blitz either and he's got the size to run over backs who get in his way.

There's no doubt that both guys will have a big say in their teams success and since both offenses will try to establish some kind of running game, they'll both have the opportunity to make big plays. We'll find out soon enough who will make the plays and who won't but for now.....Who ya got?