The Arizona Cardinals Should Not Forget About LaMarr Woodley

Share All sharing options for: The Arizona Cardinals Should Not Forget About LaMarr Woodley

Anyone who plays the Steelers hears about and game plans against James Harrison, and rightly so. The 2008 NFL Defensive Player of the Year is a pass 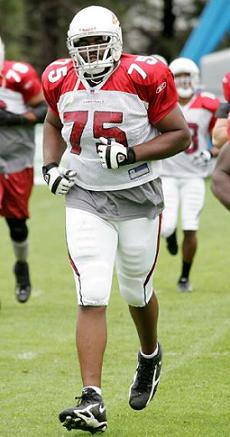 rushing demon who not only got to the quarterback 16 times during the regular season, but he also caused a league leading seven forced fumbles. He's not the only guy that Kurt Warner and the Arizona Cardinals' offensive line will have to watch on Sunday though because LaMarr Woodley has had a great post season. As teams geared up to shut down Harrison, they in turn left Woodley in more one-on-one situations and he's made them pay. He's recorded two sacks in every post season games during his career (one last year and two this year) and he's now recorded 15.5 sacks in 17 games this season. Just for the record, he's the only player in NFL history with three consecutive multi-sack games in the post season.

Containing Woodley will the responsibility of Levi Brown, for the most part. He'll no doubt get some help at times, but he'll also have plenty of downs where it's mano-a-mano. Woodley is a big OLB (6'2 265), quick off the ball and he packs a powerful first punch, but he doesn't have the pure, straight line speed of Harrison. That's good news for Brown though because his biggest weakness is speed rushers, but he normally has the size and strength to hold his own against rushers who rely on power. Woodley wasn't the starter last year when the Steelers came to Arizona and he didn't play much early in the season, but that doesn't mean that they've never faced each other. Woodley went to school at Michigan and the two locked up a couple of times when Brown was at Penn State.

Whether or not Levi Brown can handle Woodley without constant help will be a big key for the Cardinals. Mike Gandy is likely to have his hands full on the other side and if they can keep the tight end or running back help on his side, it'll keep Warner more comfortable in the pocket. The Cardinals offense won't be able to execute the way that they want to if both offensive tackles need help containing their defenders, so the onus falls on Levi Brown. It's been said several times that Russ Grimm loved Brown's intensity and nastiness when he was coming out of Penn and he'll need every bit of that on Sunday. Can he hold his own?