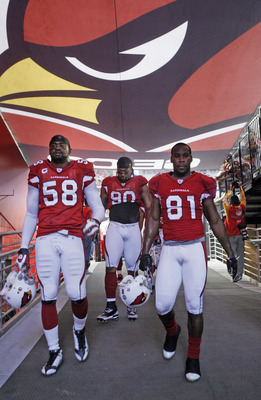 In the 88th year of the NFL Chicago/St. Louis/Phoenix/Arizona Cardinals, in their 8th playoff game ever, in only their second home playoff game, the Cardinals were able to put the clamps on the vaunted Atlanta Falcons running game and put the ball in the hands of a stellar rookie quarterback that, well, played like a rookie in the second half, winning their third playoff game ever by six, 30-34.

One-and-done was the mantra of most NFL writers and fans alike.  "The Cardinals  are the worst divisional winners ever" is still the common retort on most NFL blogs.  The Cardinals cannot beat anyone outside of the NFC West was even my foregone conclusion.  Damn, it's good to be wrong!

Some random thoughts after the jump.

Inspired Defense:  Why can't they play defense like this every game?  Karlos Dansby was stuffing the run, Gabe Watson and Darnell Dockett were plugging the gaps, and Roderick Hood and Dominique Rodgers-Cromartie were blanketing the opposing wide receivers effectively.  And for the whole game!  The Cardinals' defense began to look a little winded in the second quarter, allowing 17 points.  On the second play of the second half, Dockett initiated the play of the game when "(Matt Ryan) kind of stuck with the same snap count and there was a gap in there that was big", getting to Michael Turner just as he was receiving a handoff.  The ball popped up into the air and right into the arms of Antrel Rolle who streaked to the endzone to give the Cardinals a lead they would never relinquish.  That play seemed to set the tone for the rest of the game as the Cardinals gave up only 61 yards of offense to the Falcons and recorded a safety.  When it was over, the fearsome Falcons running game was held to 60 yards.

Run To Set Up the Pass:  Twice during the game I received text messages from  friends asking if Edgerrin James had a Colts jersey underneath his Cardinals jersery.  As inspired as the defense was playing, Edgerrin was even more-so.  His 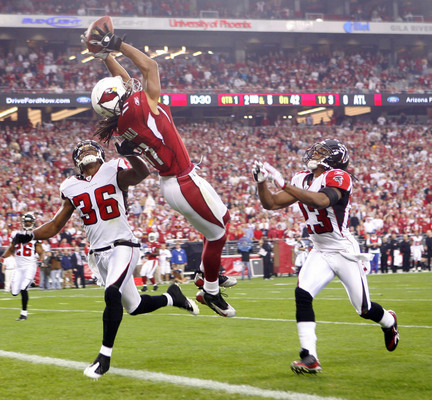 73-yards on 16 carries aren't eye-popping numbers, even for a perennially last in the league Cardinals run offense.  It was how he was used that made the difference.  On the Cardinals first possession, they threw it three times and were punting.  After Ralph Brown intercepted Matt Ryan, the Cardinals fed James the ball three times in a row, gaining six, nine, and another six yards.  On the fourth play Edge took the ball, stopped and flipped it back to Kurt Warner who connected with Larry Fitzgerald for a 42-yard touchdown.  Because of the three successful runs earlier, Lawyer Milloy bit on the run allowing Fitzgerald to get past him and make his leaping TD catch.  James' effective running early in the game kept the Falcons defense honest the remainder of the game even when it was Warner's arm milking the last four minutes off the clock to end the game.

Ready Steady Kurt:  If James' playoff experience was a benefit for the Cardinals, Kurt Warner's experience secured the victory.  Early in the game Kurt was getting hounded by the Falcons' defensive pressure, getting knocked down repeatedly.  His completion percentage was poor (5 completions in 13 attempts at one point) but when he did connect, it was for big plays like Fitzgerald's TD and Anquan Boldin's 71-yard touchdown scamper down the sideline.  Kurt even scampered five yards to get a first down at one point!  As the game progressed the archetypical Cardinals passing scheme came into effect as Kurt connected repeatedly finishing 19 of 32 passes for 271 yards.  This was key during the "four-minute drill" to end the game where Kurt connected on passes to Fitzgerald, Steve Breaston, and Stephen Spach to get first downs.  The 23 yard connection to Spach over the center of the field on 3rd-and-16 was amazing as the "blocking" tight-end was wide open in the middle of the field and allowed the Cardinals to take the Victory Formation to win the game.

Rusty Q?:  Anquan was effectively invisible aside from his long touchdown play.  He was targeted in the first series on third down but dropped the ball.  His other touch was a WR "screen" for one yard.  After taking the last two games "off" to rest his body his body didn't seem ready for the game.  Boldin "tweaked" his left hamstring on the TD play and after attempting to play on it for a couple of downs, remained on the sideline for the remainder of the game.  His status for the Divisional Round of the playoffs is uncertain.

Officiating:  It was this crew's first playoff game and it showed at times.  The Cardinals were offsides on at least one play that was missed and Bertrand Berry was held in the endzone that should have resulted in a safety in the third quarter.  This is the playoffs and officials tend to leave the hankies in their pockets unless it's a gross foul; there were a few "uglies" out there that should have been called.

Congratulations go to Ken Whisenhunt, his staff, and the entire roster of the Arizona Cardinals for advancing to the Divisional Round of the 2008 NFL Playoffs.  Winning seasons are rare enough, but this is only the third playoff victory ever for our Cardinals.  The team that showed up against the Falcons is the team we all knew was capable of playing.  Now it is time to build the momentum and put the East Coast funk behind them as Tampa Bay is only two games away!  It's time to tune in to the Ravens/Dolphins game; I hope everyone in cardinal-red is pulling for the Eagles in the late game.  Regardless, Giants or Panthers, here come the Arizona Cardinals!