Arizona Cardinals Divisional Round Match Up

Share All sharing options for: Arizona Cardinals Divisional Round Match Up 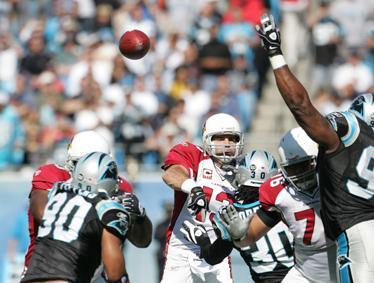 Come Saturday the Arizona Cardinals will be playing in the divisional round of the 2008 playoffs. Yes that's right. Our next match-up brings us to Carolina to take on Steve Smith and the Panthers. Even though this won't be the first meeting between the two teams, lets hope it won't have the same result. Our opponents over at Cat Scratch Reader seem to think one of the keys to the game will be their star receiver matching up against our young-gun corner, Dominique Rogers-Cromartie. DRC has come a long way this season and will face his toughest test this Saturday. Steve Smith is probably the most dynamic receiver in the NFL and will try to make DRC his newest victim. Another key to the game is the weather. Who doesn't think that's a huge factor? Its no secret that Kurt Warner and the Cardinals are a warm climate team, and possibly playing in the rain could dramatically change the outcome of this game. Its going to be a battle folks, and lets hope we can come out on top. Here are several keys to the game, RotB style: 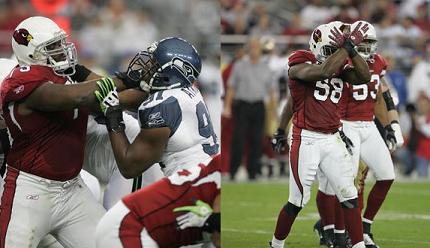 The Cardinals will most likely try to play the underdog card. It seemed to have motivated them last week, and hopefully will carry over on Saturday. We all know the Cardinals offense will show up. The real question, is if the defense comes to play. They need to play like this is their last game. Fact is, if they lose, they are out! Maybe that will be enough motivation. The bottem line is that they need to bring their A-game. That's hard to ask coming from a young team with hardly any playoff experience. That brings us to the next point, key match ups:

As the 2008 season comes to an end, lets hope the Cardinals come out on top. It's still early in the playoffs, and anything can happen. If the Cardinals can win on Saturday, they'll not only gain national respect, but it will put them in good position to contend for the championship. If you don't already know, a Cardinals win this week, and an Eagles win, will put the NFC Championship game in Arizona. Its still a while away, and this team needs to take care of business on Saturday first. Lets hope for something special.