Share All sharing options for: The Saturday Sim: Cardinals - Texans

In our most recent Saturday Sim(week 1) we saw a blowout by the Cardinals, which was obviously not the case. After failing to sim successfully the last two games, I had to get back to the drawing board. The Card 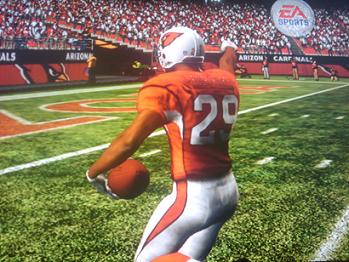 inals seemed to blowout every team they played on Madden. After tweaking the settings and increasing the game time to 8 minutes, I think I may have found a good way to sim the games. So today, the Cardinals took on the Texans in a simulated game to the death...ok not really but it was much closer/exciting this time. Let's take a look.

The Cardinals win the toss and elect to receive. Breaston is returning kicks and brings the ball to the 29 yard line. On the very first play of the game, Warner is picked off by Eugene Wilson and is hit hard in the process. Not a great start but it could happen if the protection isn't there. Having good field position, the Texans march to the goal line where Matt Shaub throws a touchdown to Andre Johnson. 0 - 7 Texans.

On the Cardinals next drive, Warner and Co. bounce back and march up the field easily, completing pass after pass. Unfortunately, the Cardinals offense buckles in the red zone and are forced to settle for a field goal. 3 - 7 Texans.

On the Texans next drive, Shaub is picked off by Gerald Hayes and the first quarter is over. 3 - 7 Texans.

The Cardinals begin the 2nd quarter choosing to pass more frequently then to run the ball. With good field position from the interception, the Cardinals capitalize by throwing a 1 yard touchdown to Steve Breaston, rather then run it in. 10 - 7 Cardinals.

The Texans immediately open their next drive running the ball successfully. Slaton has holes that you or I could run through, and he leads them down the field, only to receive a touchdown. 10 - 14 Texans.

The Cardinals answer right back on their next drive, completing several big passes to Jerheme Urban. Urban seems to be the only receiver open, and the Cardinals are taking advantage of that. He catches three, key 3rd and longs. In the red zone, Warner throws a touchdown to Jason Wright, similar to the one in Jacksonville. 17 - 14 Cardinals.

The Texans drive with little time left in the half, hoping to rack up a field goal. In good field position, Shaub is sacked by Calais Campbell, forcing a long field goal attempt that is missed. End of half. 17 - 14 Cardinals.

In the third quarter, both defenses finally show up, and the first punt is done by the Texans. The Cardinals rack up big yardage in the third quarter, and complete some key first downs. Unfortunately, they aren't able to keep their drives going, and are also forced to punt. After some misfortunes throughout the quarter, the Texans are able to put a successful drive together, and end the quarter in the red zone.

The quarter begins with Matt Shaub throwing a beauty to Owen Daniels in the end zone, giving the Texans the lead. 17 - 21 Texans.

Breaston takes the on-suing kick off to the 39 yard line, giving the Cardinals good field position to start. The Cardinals hardly run, which puts them in a 3rd and long situation. Warner completes a huge pass to Anquan Boldin, keeping the drive alive. Two plays later and Kurt Warner throws a touchdown to a wide open Dan Kreider in the end zone. 24 - 21 Cardinals.

On the Texans next drive, they continue to successfully run the ball, even converting a 4th and 2. With a goaline situation, Matt Shaub looks to throw a touchdown, only to be picked off by Dominique Rodgers-Cromartie, who then returns the ball 102 yards for a touchdown!! 31 - 21 Cardinals.

With less then two minutes remaining, the Texans show great hurry up, not using any timeouts. The Texans drive it successfully to the red zone, where Matt Shaub finds tight end James Casey for a touchdown. 31 - 28 Cardinals.

With less then 1 minute remaining, the Texans try the onside kick, which is no good. After a few penalties, the Cardinals run out the clock and win the game!! Cardinals win 31 - 28.

Final thought: While I'd like to see a better rushing game, I'd be happy with this result. The defense stepped up and generated turnovers and the offense could pass at ease. We may see a shootout on Sunday, and if we do, let's hope the Cardinals can come out on top. Thoughts?