ROTB War Room: Revisiting The Past

Share All sharing options for: ROTB War Room: Revisiting The Past

In our last two war rooms, we've evaluated key positions or groups on the opposing team. This week 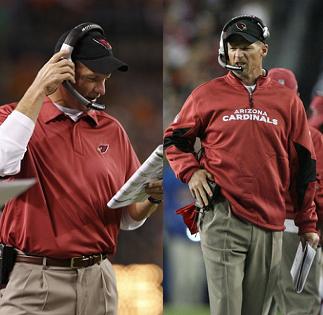 , we'll look at the past. We'll look over the Cardinals/Giants game that took place last year. Props to Drullin'OverDaCards for his post Tuesday, providing the information that the Cardinals haven't won on the road against the Giants since 1999. We won't go that far, only looking at the success the Giants had against us when they traveled to University of Phoenix Stadium last season. The date was November 23rd, 2008. The Giants were 9-1 heading into the game, while the Cardinals had won 7 straight at home. The first quarter featured five lead changes, and the Cardinals remained calm, despite missing an extra point and trailing at halftime. In the second half, the Cardinals weren't able to keep up with the Giants, as they were out-scored 20-17. They had a chance to tie the game, but an onside kick bounced through the hands of cornerback Ralph Brown, who later said he took his eye of the ball for a second. The Cardinals inability to stop Eli Manning from shredding their defense is what hurt their chances at winning. The Cardinals also allowed two big kick returns by Domenik Hixon, that would later lead to scores. Kurt Warner fumbled the ball twice, losing one, and threw an interception as well. Both turnovers set up touchdowns by the Giants. Next we'll take a look at what both teams were able to do successfully.

What worked for the Giants?

What worked for the Cardinals?

The Giants may take the same approach as last year, attempting to pressure Kurt Warner and force the Cardinals either to turn the ball over, or resort to running more... Although Steve Smith and Mario Manningham should start, the Cardinals also want to focus much of their attention on Domenik Hixon. He had a big game last week, gaining over 300 total yards, and he hurt the Cardinals last year. He's a big threat to return a kick off or punt to the house, so it would be wise for the Cardinals to have an extra pair of eyes on him on special teams... Since Derrick Ward has left, Ahmad Bradshaw has taken advantage of the extra carries. He can run blazing fast, and is also a threat receiving out of the backfield. Bradshaw has 423 yards on the year with a 6.2 ypc average. Putting a quick defender on Bradshaw would be important for the Cardinals. However, he blew an important block for Manning last week, so the Cardinals may also want to bring some different looks when Bradshaw stays back to block.

Can the Cardinals overcome the Giants well-balanced offense? What should the Cardinals do differently then what they did last year?