Share All sharing options for: The Saturday Sim: Cardinals-Giants

This week in the Saturday Sim, we feature a battle on Sunday night between the Arizona Cardinals 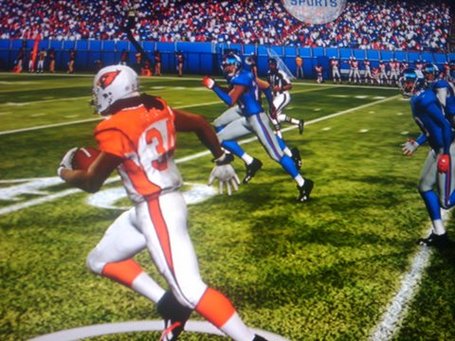 and the New York Giants. Let me tell you this - it was an interesting game to say the least. For those of you that aren't familiar with this segment, I'll watch a simulation, or a game on Madden 10, between the Cardinals, and whoever they face for that given week. The quarters are 8 minutes, the penalties are turned up, the difficulty is All-Madden, and the rosters, time and weather are all up to date. It's probably the best and easiest way to simulate a game, although simulations can be very inaccurate at times. The game was a close one, and at times I even got into it. Here's how it went down.

- The Giants receive the ball. After two runs, Eli Manning throws a pick to Dominique Rodgers-Cromartie who then returns it for a touchdown, similar to the one against the Texans. On the Giants following drive, they encounter a three and out and punt the ball. On the Cardinals first offensive drive, Larry Fitzgerald can't hold onto a would-be first down, and the Cardinals also punt. On the Giants next drive, Eli Manning starts with a play-action pass, which results in a 30 yard gain by Kevin Boss. The Giants march down the field with great protection for Eli, who throws a 33 yard sideline pass to Hakeem Nicks. Brandon Jacobs runs in the 1 yard touchdown. Game tied 7-7.

- On the Cardinals next drive, Kurt Warner throws a pick to Corey Webster. However, the Giants move the ball very little, before Manning throws yet another interception to Rodgers-Cromartie. The Cardinals can't protect Warner, and are forced to settle for a field goal. 10-7 Cardinals.

- The Giants continue to air it out, throwing deep balls to Nicks. A crucial sack in the end zone forces them to also settle for a field goal. Game tied 10-10

- The Second quarter features a lot of the same from the Cardinals. They can't run the ball at all, and are passing down field a lot. At the midfield point, Kurt Warner throws an outside pass to Tim Hightower, who breaks a tackle to run 55 yards for the touchdown. Cardinals lead 17-10

- The Giants are also forced to pass more, as Brandon Jacobs has had trouble running so far. Eli Manning continues to throw the ball to Kevin Boss, his go to man. After an offensive hold, Manning throws his third pick of the game to Karlos Dansby. Unfortunately, the Cardinals can't capitalizeon the turnover. Poor protection results in a tipped pass that is intercepted by Fred Robbins. With good field position, Eli Manning throws a sideline pass to Boss, who high steps too early, but makes the dive for the touchdown. 17-17.

- With little time left before halftime, Warner marches down the field, throwing a 39 yard pass to Jerheme Urban. Warner makes a huge mistake, throwing his third interception of the game in the end zone to  Michael Johnson. End of first half.

- In the third quarter, the Cardinals come out swinging, throwing big passes to Steve Breaston. Breaston breaks one for 25 yards down the sideline to give the Cardinals the score and put them in the lead. 24-17 Cardinals.

- The next few drives feature three and outs by both teams, using much of the time in the quarter. The Giants finally start to put things together, playing balanced. Jacobs is running better, plowing over several defenders. This sets up the play action pass, which gives Manning more time in the pocket and open receivers. The Giants can't convert a crucial third down however, and settle for a field goal. 24-20 Cardinals.

- In the 4th quarter, the Cardinals are more conservative, hoping to establish the run, and drain whatever time is left on the clock. They settle for a long field goal, but miss, keeping the score the same. The Giants however, are moving much more quickly and easily at that. They continue to give the ball to Jacobs to set up the play action. Manning has plenty of time to throw as well. In the red zone, Jacobs breaks several tackles for 15 yards and takes the ball to the 1 yard line before he is stopped. Ahmad Bradshaw runs in the touchdown, giving the Giants the lead 27-24.

- Time is now becoming of the essence, as there is 3:30 left on the clock. Kurt Warner continues to get rattled, forcing a 3rd and long. Fitzgerald makes a great catch to keep the drive alive. The Cardinals run into another 3rd and long, but Warner is hit as he throws. With less then 2 minutes to go, the Cardinals decide to punt the ball away and let their defense win(I should say I didn't agree with this, but as you will see, I was wrong). A huge holding call puts the Giants at 1st and long. The Cardinals stuff three running attempts in a row, and burn all three time outs, giving them a little over a minute left. They get the ball back with a 15 yard punt return by Steve Breaston. Facing 3rd and 8 and near field goal range, Hightower makes a first down catch and the Cardinals spike the ball. With 3 second left, Neil Rackers ties the game 27-27.

- The Cardinals win the toss, and elect to receive. On the very first play of overtime, the Cardinals decide to run with the outside toss to Tim Hightower. He gets several big blocks and breaks the run 50 yards before he is tackled at the 12. Neil Rackers lines up the makes the field goal!! Cardinals win 30-27.

I do believe that this will be a battle till the end of the game, as long as the Cardinals don't fold under the national pressure. This game could also go either way, but the Madden gods were nice enough to give us a win today. What are your thoughts on the simulation? Are the stats way off or accurate?