Share All sharing options for: Kurt Warner Amazed at Lack of National Recognition

In an interview with local radio station, KTAR 620, Kurt Warner was asked if he felt the Cardinals received enough recognition after their win over the New York Giants on Sunday night. Warner, obviously irritated by the lack of praise on ESPN, stated how much he's amazed that people still view the Arizona Cardinals as a "second ra 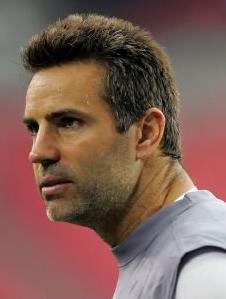 te team". This is a pressing issue at times, as the Cardinals were labeled the worst team in playoff and Super Bowl history last year. They played the no respect card to get them that far, before falling short to the Pittsburgh Steelers. After that run, critics continued to rip the Cardinals, calling last year's run a fluke. Here's what Warner had to say:

You know, I don't think a lot of people care about it but... there's always a part of you that want people to recognize what you're doing, and you want them to recognize the things that you represent. And that's one of the things that I don't think we get enough of. And yeah, maybe rightfully so that we haven't had a lot of success here so you understand it. ...I watched some highlights on ESPN yesterday, and they didn't show a single offensive highlight of the Arizona Cardinals when they talked about our game. It was all focused on the Giants and granted we made some plays in there, but it just continually amazes you that after the success we had last year and going to the Super Bowl, that we still don't get very much national recognition. ...People continue to think of us, I think as a second rate team and organization, and that's what we want to change and we want to make sure you know the guys in that locker room, that we get the credit that we deserve for the football that were playing.

This is obviously something the Cardinals feed off of, but after starting the season 3-0 on the road, it remains evident that they're trying to prove that they belong in the category of an elite team. What are your thoughts on the situation? Are the Cardinals destined to remain a second rate team to the eyes of critics?

You can here the whole interview here - Kurt Warner Interview.