Seeing as it's the bye week and nothing new will break until later in the week when we prepare for the Texans, I'd figure we'd get back, and finish, a segment that started in the off season. We began working on the all Cardinals team and nearly finished, and only have the linebackers and head coach to vote for. So here is your list of nominees for the middle linebackers: 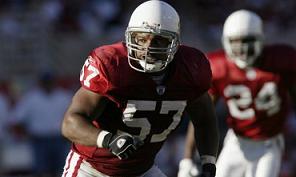 McKinnon was originally an undrafted free agent pick up by the Arizona Cardinals in 1995. He may have been one of the best undrafted rookies to sign with the Cardinals in their history, as he was very productive with his time on the team. In the 9 years with the Cardinals, he piled up 701 tackles, which averages to 77.8 per season. McKinnon was one of the more dependable players on defense, evidence being his 119 starts. McKinnon was a leader of the defense that you could rely on, with his solid tackling, and ability to both pressure the quarterback or drop back in coverage. He remained at his position until current starter, Karlos Dansby was drafted in 2004. After he left the Cardinals, he played one season in New Orleans, and hasn't played since. Today, he's actually listed as a free agent, and is able to sign with a team.

Originally, Meinert was drafted in the eighth round of the 1955 draft, out of Oklahoma A&M. He was drafted by the Baltimore Colts, but played the first two years of his career for the Edmonton Eskimos. He later found his identity as the starting middle linebacker for the Chicago Cardinals. Meinert was an all pro during his days with the Cardinals, playing in nearly a decade for the redbirds. Meinert was able to play in three pro bowls during his time. He recently passed away in 2004 with Alzheimer's disease.

Junior was a first round pick, fourth overall by the St. Louis Cardinals back in 1981. Coming out of college, Junior was all muscle standing 6'3" and 235 pounds. Junior immediately made an impact against the pass, dropping in coverage or rushing the opposing quarterback. Junior registered 12 interceptions through the air and racked up 24.5 sacks as well for the Cardinals. He was elected to the pro bowl twice as a Cardinal and once as first team all pro. Junior later played with three other teams, and was also part of management for the Seahawks, Dolphins, Jaguars, and Vikings.

That's the list of nominees. If you feel anybody should be added, drop a comment with who and why.