Since we are post-bye week, we're attempting to finish the All-Cardinal team, and we started over the weekend with the middle linebackers, and you can see the rest of the All-Cardinal team on the left pane of the home page. We are also approaching the Cardinals next opponent, the Houston Texans, so we must finish this week. Not to worry, as we only have the head coach after this. So to continue on, we move on to the outside linebackers - a group that has talented nominees, starting with Ken Harvey. 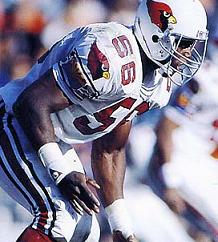 Ken Harvey was undoubtedly one of the best outside linebackers for the Arizona Cardinals, let alone the NFL. Harvey played the first 6 years of his career with the Cardinals, being used primarily as a pass rusher. In his six years in the desert, he sacked quarterbacks 47.5 times, which ranks 4th all time for the Cardinals. Harvey was also a consistent linebacker for the Cardinals, playing in 90 games over his career with the team. Unfortunately, Harvey may always be remembered as a Redskin, the place in which he played the remainder of his career. He ended with 4 pro bowls and 89 sacks, an impressive number for an outside linebacker.

The next three players all played similar roles and had similar stats to finish their career. It may seem a little bland and that's because it is. I'm not going to lie and say I saw them play or can provide in-depth information about them. That's what I'll leave up to you. If you know anything about the next three players, leave any kind of info you can in the comment section for fellow ROTBers to see. I know we have some members who are familiar with these players, and this is the best way to get the info. If not, the decision will be left up to whoever gets the most votes.

That's it for the outside linebackers. Two will make it to the All-Cardinal team to join Ronald McKinnon as the starting linebackers. Is there anybody else that could be a nominee? Who did you vote for and why?