Share All sharing options for: State of the Arizona Cardinals Roster: Safeties

Now that we're knee deep in all things off season, our positional breakdowns will get rolling. We'll break down the Arizona Cardinals roster, position by position, as well as look at the team's free agents at the position and potential free agent targets from around the league. We'll try to cover at least one positional group per day. Thank you CG for doing all the homework.  Enjoy!

The Arizona Cardinals opened camp with one solid play maker at strong safety and one big question mark at free safety. We expected quite a bit from the safety position prior to training camp, but did they produce? 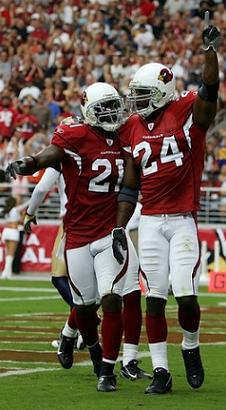 2008 Analysis: Wilson entered the season looking to re-establish himself as a premier safety in the NFL and he did exactly that. He didn't set career high stats but his ability to change a game was as prominent as it's been in several seasons. He played in 15 games (starting 14 of them) and as the season wore on the coaching staff finally started using him in blitz packages again. He picked up 2.5 sacks in the final nine games, as well as two more in the playoffs. Wilson's contributions don't always show up in the box score but when he's not in the lineup, the entire defense suffers.

2009 Outlook: Wilson's not a young pup anymore but he's still the heart and soul of the defense. He should get an extension sometime in the next couple of months that will keep him in the desert for the next four to five seasons. He may not be the absolute best safety in the league but he's versatile enough to be a force around the line and deep in coverage. He'll be leading the Cardinals defense for another handful of seasons.

2008 Analysis: We had no idea what to expect from Rolle going into this season. Opinion ranged anywhere from 'he'll be Pro-Bowler' to 'he shouldn't start over Aaron Francisco.' He was hampered by an ankle injury during training camp and that slowed his transition from corner to safety. During the bye week, we labeled him as the most disappointing player on the team but he apparently reads the blog though because he followed that up with a great second half of the season. He started each and every game this season and down the stretch he finally started to look like a safety, instead of an athlete playing out of position.

2009 Outlook: Rolle's progress in the second half of the season was encouraging and with a full off season to focus on playing safety, we should expect even more in 2009. If the Cardinals can shore up their corner position and stop shifting Rolle down to play nickel corner, he'd be an even better safety. His blend of ball skills and athleticism is rare at safety and it's something the Cardinals should exploit. 2009 might finally be the year that the fourth year pro from Miami lives up to the hype that made him the eighth overall pick in 2005.

2008 Analysis: According to his raw stats, Francisco had the best season of his career in 2007, at least in reference to tackles. In reality though Francisco was often victimized in coverage when he was caught out of position or just flat out beaten in coverage. He played in every game this season and started four games during the regular season but he's one of the major reasons why many draft-niks are listing safety as an area of need for the Cardinals.

2009 Outlook: Francisco's not a terrible player and he's too often pegged as a scapegoat, but in today's NFL a team needs three quality safeties to deal with the complicated passing attacks and Francisco's not ready yet. He's still very young despite having four full seasons under belt, so there is hope that he's still growing as a player. He'll have to improve in 2008 if he wants to stay third on the depth chart at safety and it'll be very interesting to see if the Cardinals target another safety in free agency or the draft.

2008 Analysis: Ware is primarily a special teams player, who only gets onto the field with the regular defense when someone is injured or the game is a blowout. It's hard to judge performance in those situations but Ware's  decent depth guy who can play a couple of different positions.

2009 Outlook: Ware's a solid role player but little more. He's still young and cheap (counts just $650K against the cap next year) so he's probably back with the same responsibilities.

2008 Analysis: Keyes spent most of the season on the practice squad after going undrafted out of UCLA. He had a decent preseason totaling 11 tackles in limited playing time and returning an interception 84 yards for a touchdown.

2009 Outlook: Keyes will be an interesting name to keep an eye on in 2009. He's got the size (6'2 200) to be an NFL safety and a decent amount of athleticism. He was very productive in college and has a knack for big plays. He's a candidate to fill Ware's role next season.

A look at free agents and an overview of the position, after the jump.....

The Cardinals don't have any free agent safeties at this time. They signed Keyes last week.

Position Overview and Possible Needs: The Cardinals seem to be completely set with Rolle and Wilson as the starting safeties. They're a dynamic duo who should be even better in 2009. There is some depth behind them but it's questionable at best right now. Francisco played quite a bit in 2008 and had many more negative plays that positive. An upgrade at the '3rd' safety position would really help the secondy considering how much A-dub plays around the line of scrimmage, especially on passing downs.

There are quite a few free agent safeties on the market right now ranging from big name talents to role players. Assuming that the Cardinals are set with Wilson and Rolle as the starters, here are some safeties that are currently looking for a job and whether or not the Cardinals should pursue.

Guys who are too expensive or wouldn't accept 3rd on the depth chart:

Anyone on that list sound interesting or are there any names that we didn't mention? Do the Cardinals need an upgrade at safety or are you comfortable with keeping the same group together for 2009?