Share All sharing options for: State of the Arizona Cardinals Roster: Corner Backs

We began our breakdown of the Arizona Cardinals roster by looking at the safeties this morning and now we shift our focus to the cornerbacks on the team. As before, we'll look at the corners from this season and the corners who are on the market.

The Arizona Cardinals corner backs took their fair share of lumps during the 2008 season. Not only did they allow more passing touchdowns that any team in the league, but they also ranked in the bottom third in completion percentage allowed and QB rating against. The unit did get better as the season progressed but they were still exploited in some key situations down the stretch and in the playoffs.

2008 Analysis: DRC started the season as the Cardinals 4th corner and didn't see a ton of playing time early. Rolle was dropping down to nickel corner in passing situations and limiting DRC's snaps. As the season wore on though he started to get his feet wet and got burned deep a couple of times (BUF and CAR). At the bye week we looked back at his first six weeks and he had more negative plays that positive plays but at least he was getting playing time. He learned on the job very quickly though as he took over Eric Green's starting job just one week later and never relinquished it. He'd go on to start the final nine games of the season and led the team in interceptions with four and passes defended with 19. He continued to impress in the playoffs with two more interceptions, nine passes defended and 20 tackles, including a season high 10 against the Falcons.

2009 Outlook: The arrow is pointed straight up for DRC and his ceiling is as high as any player in the league at any position. He's got the athletic ability to one of the best corners to ever play the game but he's must continue to work hard. At times in 2008, he looked like he was on the verge of being a shut down corner and his mission in 2009 should be to show that ability on a consistent basis. Larry Fitzgerald should push him every day during camp and DRC will be a key to the Cardinals success this upcoming season.

2008 Anaylsis: Hood's season is a bit of an enigma because he started out very solid. Early in the season we were praising his performance against the Dolphins, Cowboys and even Jets, but somewhere along the way Hood lost his mojo. Once DRC took over for Green, teams starting throwing in Hood's direction and the results were disastrous for the Cardinals. Hood was especially exploited by the Eagles and Vikings during the regular season and at points even Whisenhunt was having to address his poor play. Hood had a good season finale and rebounded a bit in the playoffs but his play down the stretch was one of the reasons the Cardinals defense plummeted.

2009 Outlook: Hood could very well be the wild-card for the secondary next season. If he returns to the caliber of player that was in 2007 and early on in 2008, the secondary has an opportunity to be pretty good. If his play down the stretch leaks over into 2009 though, he's nothing more than a liability. Part of me wonders if his good play was just a mirage because other teams chose to attack Green on the opposite side but once DRC took over, Hood was the weak link. Either way, his progression in 2009 could be the difference between a good defense or just a revolving door. 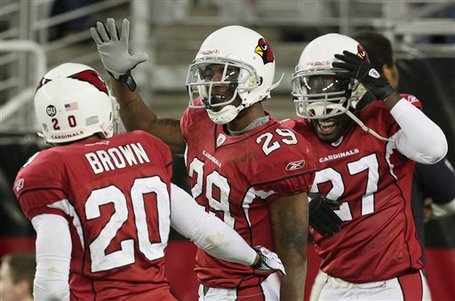 2008 Analysis: Brown started the year very slowly because he was probably fifth on the depth chart behind Hood, Green, DRC and even Rolle. As the season progressed though Brown worked his way up the depth chart and by the end of the season he was the nickel corner. He picked up 14 of his tackles and all six of his passes defended in the final seven games and his lone regular season interception came in the season finale. He continued his impressive play in the post season by picking of a pass in each of the first two playoff games.

2009 Outlook: Brown is the perfect example of why coaching staffs like having veteran backups. He's not very big or athletic but he finds a way to get the job done. He's not a guy that will command a big price tag in the off season and if the Cardinals want him back, I'd bet that he'll return. They should still look to upgrade the corner position but Brown could again be waiting in the wings in case of an injury or sub-par play.

2008 Analysis: Green entered the 2008 season knowing what was in front of him. He was under a one year contract and the Cardinals drafted his replacement in the first round. He had to either produce or get out of the way and by the ended of the season, he was so far out of way most fans might have completely forget he was on the team. He started the first nine games but once DRC took the starting job, Green's playing time diminished significantly. In fact he fell all the way from starter to inactive on game days.

2009 Outlook: Green won't be a Cardinal next year and he knows it. It'll be interesting what kind of market there will be for the fourth year pro from Virginia Tech. He's got the athletic ability to be a player in this league but his head hasn't caught up with his body yet. Maybe it's happen, maybe it won't. I'd imagine he'll sign a one or two year deal somewhere and try to prove he's worth some playing time.

2008 Analysis: Adams spent part of the season on the practice squad but injuries and the ineffective play of Green moved him to the active roster. By the end of the season, Adams was active on game days while Green was in street clothes. He played primarily on special teams and proved to be a solid tackler.

2009 Outlook: Adams is an ERFA which means basically that he'll back, probably for as little as the Cardinals can pay him. His ceiling in 2009 would be assuming Ralph Brown's role if no one is added to the roster. He's small (5'8 181) but competitive and his best shot to stick around will be as a special teams terror. He's young and very cheap so he'll have a leg up on some veterans fighting for similar roles.

The only Cardinals corners under contract for 2009 are DRC and Hood so they've got some work to do filling out the roster. The good news is that allows them plenty of flexibility to shake up the position either in the draft or via free agency. Ralph Brown in an unrestricted free agent but the market won't go crazy over him, so if the Cardinals want him back I'd bet they're able to resign him. Eric Green is as good as gone. I'm not sure if he'd be back if he offered to pay the Cardinals and wash Whisenhunt's car twice a week. Michael Adams will be resigned but it'll be up to him to prove he deserves a roster spot at the start of the season.

Overview and Needs: Corner back might be one of the biggest needs on the entire team. To start they've only got two guys under contract but they also need to upgrade the quality of the #2 corner and build better depth. That can obviously be done one of two ways, Hood can improve and any addition would assume the nickel corner or sign/draft a #2 corner and move Hood to the nickel. The secondary as a whole wasn't helped out by a pass rush that disappeared down the stretch but having two solid corners will go a long way to improving the 2009 Arizona Cardinals.

There's a large crop of free agent corners and being that it's one of the team's biggest needs we'll consider every single one expect for Nnamdi Asomugha. He'll likely command over $10 million a season and that's tough pill to swallow on a single defensive player (although he and DRC would be a nice tandem). Here's the rest of the group:

There are a couple of other names that I'm not terribly interested in for various reasons. Kelvin Hayden and Phillip Buchanon are both established corners who excel in a cover two, but might not be as effective in a defense that relies on more on man coverage. From the nut-bag files, DeAngelo Hall and Adam 'PacMan' Jones are also free agents, if you really feel like rolling the dice.

Well there you have it, a long list of potential targets. Who would you most like to have? Will the Cardinals actually make a move? Is corner really a serious area of need?