Arizona Cardinals News: Update in the Search for Coordinators

Share All sharing options for: Arizona Cardinals News: Update in the Search for Coordinators

The Arizona Cardinals are in the process of finding two new coordinators and the past five days, we've gotten all kinds of conflicting reports. In an effort to simplify things, here's what we either know or don't know.

The search for Todd Haley's replacement seems to be an internal one. I haven't heard a single outside name seriously mentioned by anyone, although there's a rumor that the Cardinals asked the Niners for Mike Martz's number (again that's just a rumor). The odd 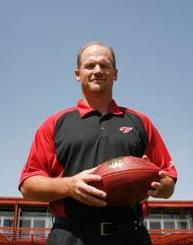 thing about this search though is the firing of QB coach Jeff Rutledge. It's been mentioned that the new coordinator, whoever it ends up being, would most likely want to bring in their own QB coach, but you'd think that an internal candidate would already have a good working relationship with Rutledge. Other than that, there's no real news to report. The candidates for the open coordinator spot include everyone on the current offensive staff, not named Dedric Ward. That leaves Russ Grimm (currently offensive line coach/assistant head coach), Maurice Carthon (running backs coach), Mike Miller (receivers coach) and Freddie Kitchens (tight end coach) as possible candidate. As for Ward, some expect him to ask the Cardinals for his release so that he can follow Haley to Kansas City and others expect him to move up to receivers coach (the position he played in the NFL). The bottom line on the offensive side of the ball is that the entire staff is up in the air right now. There are currently two openings so someone will have to be hired but it's also likely that current coaches could shuffle around and everyone could be sitting in a new chair in a month's time.

The defensive side of the ball is a bit more clear in some ways. At this point in time, there appear to be three candidates: Bill Davis (current LB coach), Teryl Austin (current defensive backs coach) and Keith Butler (Steelers' LB coach). Austin is a new name and some question if he's really a candidate or if this is just a 'courtesy interview.' He's only been an NFL coach for six seasons and he's only coached defensive backs. Davis, as we've already discussed, has coordinator experience and obviously knows the current personnel. Butler is the real wild card in the mix though. Some say he's Whisenhunt's first choice and that the Steelers have granted permission for the interview. Kent Somers still hasn't been able to confirm that and he also reported that Butler was telling others in Pittsburgh that he wasn't 'going anywhere.' There don't appear to be any other candidates right now, but the staff could still get shaken up if an outsider gets the coordinator spot and wants to bring in his own staff (the same can be said for the offensive side as well).

Update: Darren Urban is now reporting that not only have the Steelers not granted permission for Butler to interview but that the Cardinals haven't even asked permission yet. It's pretty obvious that no one really knows what's going on.

The kicker for this whole situation is that the combine starts one week from today and free agency starts in just over two weeks (Feb 27th). To make matters worse, priority free agents like Kurt Warner and Karlos Dansby could wait until the coordinators spots are filled before they think seriously about signing. To put it bluntly, the Cardinals can't start the evulation process for the draft or free agency until the coaching staff is filled out and the clock is ticking.