Even though the Cardinals season is over, it's not too late to look back at the season and what it meant to this organization. You've heard it befo 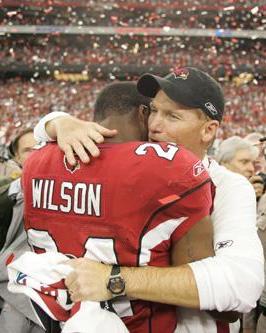 re: the Cardinals first division title since 1975, first home playoff game since 1947, first home playoff win since then also, first NFC Championship, and first Super Bowl appearance. Unfortunately, they couldn't take home their first Lombardi trophy, but there's always a first for everything. The season was without a doubt, a magical season that none of us can ever forget. It will remain as one of the best in Arizona Cardinals history, and in all of our memories. That brings us to the next subject: The Top Five Most Surprising Moments of the 2008 Season. This can range from most memorable performances to most shocking. The season was full of surprising moments and I really had to think about what the most surprising were. So here is the top five for 2008: