State of the Arizona Cardinals Roster: Inside Line Backers

Share All sharing options for: State of the Arizona Cardinals Roster: Inside Line Backers

Our third installment of 'State of the Roster' brings us to the Arizona Cardinals inside line backers and if you missed either of the first two, they're worth a look (CB's and Safeties). The Cardinals have been fortunate the past two seasons that they're middle backers have been relatively healthy and it's led to them being a productive unit.

2008 Analysis: Dansby entered the 2008 season under a one year (franchise) contract knowing that he was basically auditioning for every team in the NFL and he responded with the best season of his career. Not only did he play a full season for this first time, he topped 100 tackles and was at his best when the Cardinals really needed him. He again showed the ability to make plays all over the field and his athleticism allows him to excel in pass coverage while also being a force in the running game. While some may argue, Dansby looked like the best defensive player on the roster for parts of the season.

2009 Outlook: Dansby enters the free agent market in his prime and will dollar bills in his eyes. He'll get monster money from some one the next couple of months and hopefully the checks will say Arizona Cardinals on the top. He should be a very good linebacker for at least the next five years. 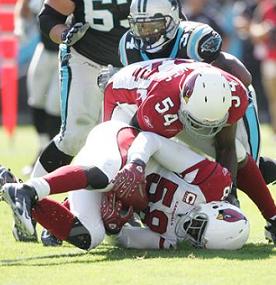 2008 Analysis: Generally when one person on your team steps up and has a great season, it hurts the numbers of another player. Hayes didn't have a bad year by any means but he didn't top 90 tackles for the first time since becoming a full-time starter and his half a sack was the lowest total since starting 2004 when he started just one game. He's still a very dependable player (missed just two games in three seasons), who tackles well and is relatively cheap when considering his production.

2009 Outlook: Hayes will be one of the Cardinals starting linebackers in 2009 and for the next several seasons. He won't turn heads with highly athletic plays but he makes up for his lack of athleticism with good instincts. He can get lost in space but he's at his best when working down hill towards the ball carrier. He was used as a two-down linebacker this past season and that could be a trend that continues, especially if Dansby is re-signed.

2008 Analysis: Beisel's contributions in 2008 were limited but it wasn't because of his ability or inability. His lack of playing time was directly related to Dansby and Hayes staying healthy for the entire season. For the first time since 2003, Beisel didn't start a single game and he didn't really receive any extensive playing time until the Super Bowl. He showed in that game though that he still has what it takes to be a solid backup linebacker and occasional spot starter.

2009 Outlook: It'll be interesting to see what kind of market there is for Beisel considering he'll be 31 before the season starts. He was never a guy who relied on amazing athletic ability so it's not like he'll suddenly lose his ability to make plays though. He can still be a productive member on a team by contributing on special teams and playing occasionally with the regular defensive unit. I wouldn't be surprised at all to see him sign a small two year deal with the Cardinals.

2008 Analysis: Hobson was signed in late December and only played in the season finale before being inactive for the playoffs.

2009 Outlook: The expectations for Hobson in 2009 range anywhere from not even making the roster to playing a major role in the defense. Just three seasons ago he racked up 100 tackles, six sacks and an interception for the Jets so there is some hope that he could contribute. Since we obviously saw very little of Hobson, we asked a guy with much more knowledge, John B of Gang Green Nation (our fellow Jets blog) and we'll have a more in-depth story on that in the very near future.

2008 Analysis: Highsmith was having solid rookie season until a torn ACL in week nine ended his season. His contributions were limited to special teams but he showed an ability to cover quite a bit of ground and a nose for the football.

2009 Outlook: As long as he's healthy, Highsmith will be a part of the 2009 Cardinals. What we don't know however is how an ACL injury will effect a guy who wasn't a tremendously gifted athlete to begin with, but these injuries are near as bad as they were five to ten years ago. Highsmith's ceiling in 2009 is still probably limited to special teams but he could just an injury or two away depending on who is resigned and/or brought in.

Overview and Needs: The inside backers position hinges on the future of one player: Karlos Dansby. If he resigns with the Cardinals, they're starters are set in stone and the quality of the depth is average, at worst. They might bring in another veteran player (possibly Beisel) to compete with Hobson and Highsmith, but overall Dansby is obviously the key. If he signs elsewhere, the Cardinals would have to scramble to find a starter. Could they draft a guy who could start from day one? From the 31st spot that would be unlikely at best. That would leave them looking for a guy in free agency and there appears to be quite a drop off from Dansby to the rest of the group. With that in mind, here's the crop of free agent inside backers in case Dansby flys the coup:

If you ask me the picture is grim unless Dansby is resigned or the Cardinals dole out big money to a free agent who won't be as good as Dansby (did I mention they should resign him?). No one on this list of marginal youngsters or over the hill vets does much to inspire confidence in me, but maybe that's why Rod Graves is GM and I'm typing away on a computer. How do you see the position and is it an absolute must that Dansby is brought back? Can they replace him with a free agent?