A man once considered too violent for the NFL, and we're not talking about today 'softer' NFL, is now considered a leader of men. Chuck Cecil used to be a hard hitting safety, some say cheap shot artist, who spent the 1993 season with the Cardinals (then the Phoenix Cardinals). Now Cecil calls himself the defensive coordinator of the Tennessee Titans. Cecil began his coaching career in 2001 and has coached safeties, nickel backs and defensive backs, but this week he was promoted to the head of the Titans' defensive staff. 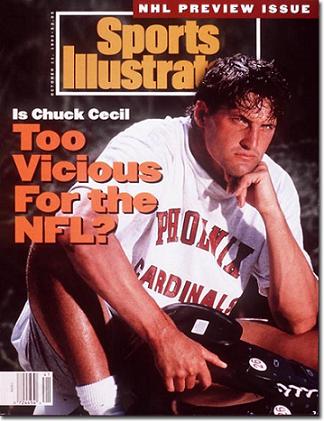 Cecil first stood out as an All-American at the University of Arizona and he was drafted by the Packers during the fourth round of the 1988 draft. He was voted to his only Pro Bowl following the 1992 season but that off season he'd sign with the Cardinals and be in for the most 'noteworthy' season of his career. Midway though the season, Cecil would grace the cover of Sports Illustrated with a simple headline that read, "Too Vicous for the NFL?" Cecil had made headlines his entire career for being an unrelenting player who laid brutal hits on anyone that came into his zone, but he also become known for leading with the crown of his helmet. His playing style led the NFL to change the way the game was played and Ceci's game in turn was never the same. Cecil wouldn't play the '94 season and the '95 season would be his final in the NFL.

So in a small twist of fate when the Cardinals travel to Tennessee this year, they'll be facing a defense led by a guy that they're very familiar with.