Karlos Dansby Gets the Franchise Tag

Share All sharing options for: Karlos Dansby Gets the Franchise Tag

The Arizona Cardinals have slapped the franchise tag on Cardinals linebacker, Karlos Dansby, for the second straight year. The word isn't official yet, but it is expected to be announced in the next two days, seeing how the 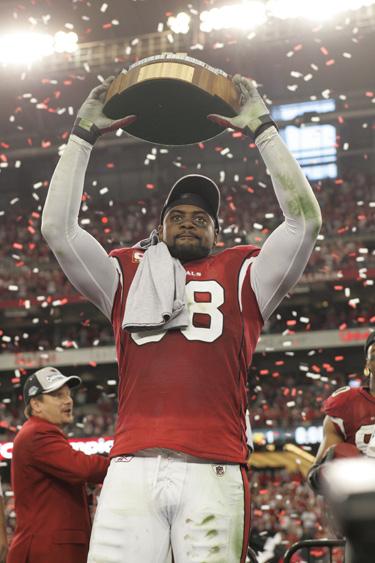 While Dansby acknowledged that he isn't surprised, there is a feeling that he needs a long term contract to stay happy in Arizona. In case you aren't aware of how the franchise tag works, it guarantees the player a contract average of the top five highest paid players in the league, at their respective position. The other possibility was that the player would receive 120% increase then the previous year's pay. Whichever option pays the most is what the player receives. Therefore, Dansby will receive the 120% increase and make $9.7 million in 2009. The reason that most players are unhappy about getting the franchise tag, is because it keeps them from getting a large signing bonus that they would normally get in free agency. It also pretty much dismisses any chances on him signing with any other team. The Giants and Dolphins had expressed interest in Dansby and that possibility is officially out the window now. He was already going to demand a lot for a new contract, but now a team would have to match the $9.7 million that he would get from the franchise tag. If another club were to make a higher offer and the Cardinals declined to match it, the Cardinals would get two 1st round picks as compensation. The Cardinals have until July, which is the deadline to sign any franchise players to a long-term deal. If they don't, we'll be going through the same thing this time next year.

I’m not surprised at all. I’m optimistic we can get something done. But we’re going to see.

Karlos is a leader on the Cardinals defense, along with safety Adrian Wilson. Dansby had a great season and showed up at every game. He is a playmaker, and seems to always be around the ball carrier. He was named as a pro bowl alternate and is emerging as one of the top inside linebackers in the league.