Share All sharing options for: Off Season: Tags, Signings, Trades, and Combine

Update: In light of the free agency being just days away, we've decided to give this post a home. It's already filling up and will feature a lot of breaking news. It will now be featured on the left hand side of the page below State of the Arizona Cardinals Roster. Just click on this icon to be directed to this post.

This is going to be an official thread/information post for any breaking news related to the above: Franchise tags, player signings, and player trades. I'll post what I can find but if anybody finds anything, add a comment and I'll post it.

Royal – Clinton Portis really lamented Royal leaving, because he said that he was a great locker room presence. Decent receiving TE, not as good at blocking. He was drafted in the 5th round out of LSU under Spurrier’s pass-happy regime and didn’t necessarily fit in with Gibbs’ more run-oriented offense; plus, the ’Skins drafted Chris Cooley in the 3rd round of 2004, making Royal redundant but inferior and expendable as a pass catcher. Probably not a starter, but certainly makes a serviceable backup. Red zone threat.

Dockery – Drafted in the 3rd round out of Texas. Blocked for Cedric Benson for the ‘Horns. Big guy, could probably theoretically start as a left tackle on a team that passes a lot, but really more suited to guard in the pros. The Bills overpaid for him in the first place, (heck — when a team outbids the Redskins, it almost always means they’re overpaying) gave him a ridiculously large contract for a guard. He’s good, can be borderline great even sometimes, and his run blocking improved a lot under Joe Bugel’s tutelage. Pretty good fundamentals.

- According the Adam Schefter, the Carolina Panthers tried to trade safety Ken Lucas, to the Detroit Lions. Lucas refused to play for the Lions and did not expect the trade.

- Nnandi Asomugha is off the market. The Raiders have signed him to a 3 year deal worth anywhere from $45-50 million.

- Jordan Gross has also been signed. The deal is 6 years. First 3 years are worth $30 million.

- The Colts have signed cornerback Kelvin Hayden to a 5-year $43 million dollar deal. $22.5 million is guaranteed. Hayden had a key pick-six in SB 41.

- Vernon Carey resigned with the Dolphins today for a 6 year deal worth $42 million. Carey started all 16 games last year, allowed 4.5 sacks, and had 2 penalties.

- The Miami Dolphins resigned linebacker Channing Crowder to multi deal contract before free agency begins. Crowder is 25. The deal is a 5 year deal. 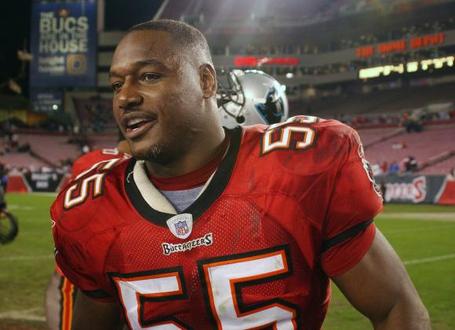 save $10 million for the salary cap and now puts them close to $50 million under. Could they be making a move for somebody big. Reports have said that they will try to make a run for Albert Haynesworth.
- The New York Giants gave tagged Brandon Jacobs a 4-year $25 million deal.
- Like Hevchv reported, the Jets restructured WR Laveranues Coles contract so that he could become a free agent on friday.
- The Texans released several players, including safety Will Demps, tackle Ephraim Salaam and defensive end Anthony Weaver.
- The St Louis Rams cut quarterback Trent Green and wide receiver Drew Bennett.
- The Carolina Panthers cut  running back Nick Goings, wide receiver D.J. Hackett and offensive lineman Jeremy Bridges.
- Yesterday the Chiefs released quarterback Damon Huard, cornerback Patrick Surtain, linebacker Donnie Edwards and tight end Michael Merritt.

- The Minnesota Viking's center Matt Birk is expecting a new contract becuase he is in the last year of his current deal. The Vikings have expressed they want him back and Birk feels the same. Birk is 32 years old and is a 6-time pro bowler.
- The Vikings are also close to making a trade for the Texan's quarterback, Sage Rosenfels. The Texans will likely get a 4th-round draft pick in return.
- From Adam Schefter, it's been reported that Colts receiver Marvin Harrison has asked to be released after failed talks to restructure his contract. A likely place for Harrison to land could be the Philadelphia Eagles. Update: The Colts have agreed to release Harrison.
- The Atlanta Falcons have released safety Lawyer Milloy. Milloy is a 4-time pro bowler. We may be seeing more of him as he has said he would like to join the Seattle Seahawks.
- The Oakland Raiders are still cleaning house as they have cut offensive tackle Kwame Harris and fullback Justin Griffith. That adds to the list of players already cut with safety Gibril Wilosn, defensive end Kalimba Edwards, and wide receiver Ronald Curry. These moves will save the Raiders $14.6 million against the cap. It is expected that they will also release receiver Javon Walker before a $5 million bonus he is set to receive on March 3.
- Finally, former Jaguars running back Fred Taylor, is going to speak with the New England Patriots and Buffalo Bills on Wednesday. Both teams are in need of a running back.
[Note by Andrew602, 02/23/09 10:22 AM MST ]
- Over the weekend, the Jets released another player, guard Brandon Moore. Releasing Moore would save them $7.5 million against the salary cap.
- Adam Schefter reported that Cowboys linebacker DeMarcus Ware was told by Ray Lewis that he wants to play for the Cowboys.

- Julius Peppers gets tagged according to Adam Schefter and cfaddct:

...the Carolina Panthers designated Julius Peppers as their franchise player, a league source confirmed Thursday. Peppers’ franchise number is $16.683 million, but it is hardly the money that Peppers wants. He wants his freedom, the ability to leave Carolina and go play in a city that would be desirable to him.

- The Raiders apparently don't learn from mistakes and are planning on bringing back Jerry Porter. We'll see how that develops.

- Albert Haynesworth is going to test the free agent market. He will not sign with the Titans until he can see what will be available from other teams.

- The Miami Dolphins will reportedly not place a franchise tag on any players that are set to become free agents.

- The New York Jets have released TE Chris Baker. To avoid paying him a $9 million bonus, they released him, hoping  to resign him, but he could be available via free agency. The Cardinals are short at TE and this could be a possibility. Baker had 194 receiving yards last season and has 12 career touchdowns.

- The Washington Redskins released linebacker Marcus Washington today. That freed up $4.5 million in cap space for the Redskins. Washington made the pro bowl only one time in 2004. The 31 year old linebacker only played in 10 games in 2008 and recorded 31 tackles.