It's often said that football is a game of inches and that was never more true than last night when the Steelers beat the Arizona Cardinals in Super Bowl XLIII. One of the best Super Bowls ever played had it's share of great plays, close calls and questionable officiating, but in the end the Cardinals miracle season came to a disappointing end. One thing that wasn't disappointing though is how the Cardinals fought back from a 20-7 deficit in the final 11 minutes of the game. Facing one of the best defenses the NFL has ever seen, Kurt Warner strapped the offense on his shoulders and brought the Arizona Cardinals all the way back with 16 unanswered points. In the end it wasn't meant to be, but the Cardinals shouldn't hang their heads. No one expected them to be here and not many gave them a legitimate 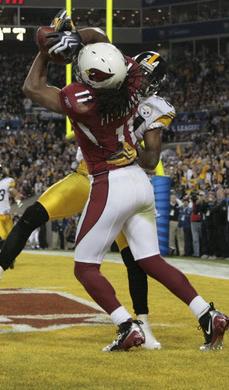 chance. Here's a look at the guys who had a terrific game:

Kurt Warner: Warner started slowing but in the fourth quarter, he was brillant. Brillant to the tune of 13 of 18 for 211 yards and he led two long scoring drives. Ultimately his lasting memory from this game will be the James Harrison interception, but as a whole, he was great. He was the best quarterback the Cardinals could have asked for this season and especailly in the month of January.

Larry Fitzgerald: The vaunted Steelers defense did everything that they could to take Fitzgerald out of the game from the very first first snap and for three quarters it was very effective. Entering the fourth, Fitzgerald had only one catch for 12 yards and Warner had only thrown his way twice. In the fourth quarter though he exploded for 6 receptions and 115 yards, including two touchdowns. Fitz played like a champion when the Cardinals needed him most and he completed the best post season performance ever by a wide receiver.

Darnell Dockett: One of my few predictions that actually played out was that Dockett would have a big game and he didn't disappoint. He, like Warner and Fitz, waited until the fourth quarter to break out but his two sacks on consecutive Steelers drives helped get the Cardinals offense back on the field. Of his six tackles, five of them (including the sacks) were for one yard or less.

Other guys who had very good games:

Karlos Dansby - led the team with eight tackles and an interception

It'll take a while to get over a game like this, but I think we can all agree that the Arizona Cardinals played a heck of a game. We'll break down many other elements of the game later today and in the days to come. Who else had good games? What will be your lasting memories from yesterday?