Share All sharing options for: Questionable Officiating Outshines the Cardinals and Steelers in Super Bowl XLIII

In a game when the National Football League puts it's two best teams on the biggest stage in front of the Nation and the world, a third team stepped into the spotlight. Officiating is a thankless job that rarely receives anything but criticism but it can't be denied that the officials were the focal point for a large part of Super Bowl XLIII. By the end of the game there were 18 accepted penalties for 162 yards and another two penalties for 20 yards were declined. The most called penalty was holding as it accounted for 7 penalties for 70 yards, but what sticks out the most in my minds are two calls/moves that weren't made late in the fourth quarter.

Santonio Holmes Uses the Ball as a 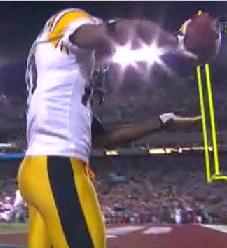 Prop: The NFL has a simple and clearly defined rule that players can not use the ball as a prop when celebrating. Doing so after a touchdown results in an automatic 15 yard penalty on the subsequent kickoff. If we can assume the same type of return, the Cardinals would have started their final drive from their 38 yard line instead of their own 23. With :30 seconds on the clock 15 yards is a significant amount of yardage, especially considering that the Cardinals got across midfield with :15 seconds left. Again if we tack on 15 yards, they'd have been inside the Steelers 30 and they'd be in range for a couple of legit shots into the end zone.

Final Play Not Reviewed At All: On a play that ends one teams season and crowns a champion, why did the officials not take a second look at a very close play? With :15 seconds on the clock and the Cardinals out of timeouts, Warner drops to pass and immediately feels pressure. He shuffles in the pocket and loads up for a deep pass, but LaMarr Woodley gets his hand on the Warner's arm and knocks the ball loose. The play was ruled a fumble and the Steelers took possession with just a few second left on the clock. I don't know if the play would have been overturned, but there's no doubt in my mind that if that play was outside of two minutes, Ken Whisenhunt would have challenged the call. If a play is that close in a game of this magnitude, why not take a second look?

Before I get blasted by Steelers fans, I'm not blaming the officiating for the outcome of the game or saying that they're the reason the Cardinals lost. I'm simply saying that in a game that was obviously called very tight, they missed some huge calls as well. What did you think of the officials last night? Would you rather them call the plays by the book or let guys play in game of this magnitude?