There are countless reasons why the Pittsburgh Steelers are planning a parade right now and the Cardinals are headed back to Arizona with their heads down and the Cardinals will have plenty of time to second guess themselves. While there isn't a single guy who had a terrible game, there were certainly some guys who didn't play well. With that in mind, here's some guys who will be in the coulda, woulda, shoulda mindset for the next couple of months: 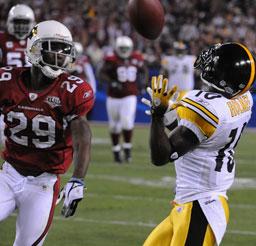 breaking up a deep pass to Nate Washington that was a sure touchdown, on the Steelers second series. He followed that up with getting his hands on a deep pass intended for Santonio Holmes on the Steelers next drive. If he'd have been a step quicker on either of those plays, he'd have picked them off and we'd probably be singing a different song today. For most of the game though he was playing 10 yards off the line of scrimmage and letting Holmes catch short passes in front of him. How much of that alignment was his fault and how much blame should fall on Pendergast, we may never know but it was a game plan that didn't fare well at all.

J.J. Arrington: Whether it was nerves or simply butta-fingers, Arrington couldn't managed to field a kickoff to save his life. He completely muffed a catch early in the second quarter and let another kick roll between his legs for a touchback early in the third quarter. For a guy who averaged 25.6 yards per return during the regular season, Arrington didn't raise his game in the playoffs averaging just 20.9 yards per return and 20.2 in the Super Bowl. He did catch a couple of passes for decent gains but he gave the Cardinals almost zero on kick returns. Arrington was bad enough that Breaston was back returning kicks late in the fourth quarter.

Mike Gandy and Levi Brown: Mike Gandy racked up three holding calls and two of them came in the fourth quarter as the Cardinals are trying to mount a furious comeback. Each of his penalties effectively killed his offenses momentum and they'd punt on each drive, without acheiving another first down. We knew that Levi Brown would have his hands full with LaMarr Woodley and it's probably safe to say that Woodley got the best of him. Neither of the his sacks were particulary dominating but Brown certainly didn't do his job, especially on the final play.

A couple of other plays really irked me like Adrian Wlson running into the holder and Dansby's roughing the passer, but they don't stick out as bad as the guys listed above. Who else had a bad game or underacheived?