3-4 vs. 4-3: How Will It Effect the Arizona Cardinals Defensive Line?

Share All sharing options for: 3-4 vs. 4-3: How Will It Effect the Arizona Cardinals Defensive Line?

There's been quite a bit of talk recently about how a 3-4 defense would effect the current personnel of the Arizona Cardinals as well as how it would effect their draft targets and free agent signings. I'll be the first to tell you I'm no football expert or former defensive coordinator at any level, but I've done some nerd-like research (after all that's what the interenet is for right?) into the 3-4 since Ken Whisenhunt brought the scheme to the desert. It's not only a completely different defensive scheme with different responsibilities but it's also takes a different mindset for players, as well as a different kind of player. For the sake of simplicity in this article, we'll assume that there won't be much of a change for the secondary. The only tangible difference I could find was that they'll probably run more man-to-man coverage, but the Cardinals were never a big 'zone coverage' team to begin with. That allows us to focus on the front seven and more specifically, what the changes will be for the defensive line and linebackers as a whole and individually.

Disclaimer: We all know that Whisenhunt has downplayed the notion of going to 'true 3-4' but he acknowledged that they'd be implementing more "Pittsburgh-type' concepts so I think we'll see a defense much closer to a 3-4 than we've seen the past two seasons. 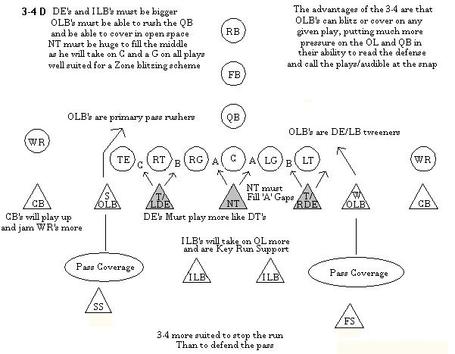 To get our feet wet, lets start by looking at the defensive line first and then we'll move the linebackers with our next installment. Here's what we can expect to see from a 3-4 defensive line....

Nose Tackle: I looked nine teams that ran 3-4 defenses, including the Steelers, Chargers, Dolphins, Cowboys, Browns, Jets, Patriots, Ravens and 49ers, and the average size of their nose tackles was 6'3 329. Only two tackles tipped the scales at less than 315 (none under 300) and four were listed over 340. Those nine players averaged 49 tackles and 2.4 sacks this past season. 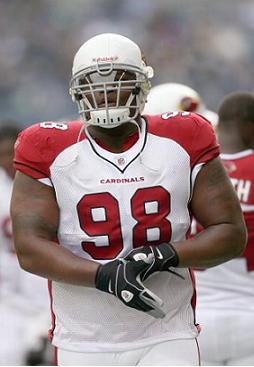 Nose tackles by definition are the biggest of 'big uglies.' If there's less glamorous position in the game of football, I haven't found it.  They line up directly over the center and command a double team on just about every play. The production of nose tackle is rarely measured by his individual stats, but instead by the stats of the linebackers behind him and the run defense as a whole. Most nose tackles are 'two down' players and they'll come out of the game in obvious passing situations. To put it simply, they're job isn't to make plays, it's simply to allow others to make plays.

Defensive Ends: Looking at the same nine teams, the average defensive end is 6'5 and 299 pounds. The lightest (a tie between four players) was 285 while the heaviest tipped the scale at a whopping 325 pounds. Interestingly enough, three teams (DAL, NE, CLE) had both starting ends over the 300 pound mark while four teams (SF, NYJ, MIA, PIT) had both ends under 300. Those 18 starters averaged 43 tackles and 2.8 sacks on the season, with just four players breaking the five sack mark.

As you can see, the 3-4 defensive end is a completely different animal than the 4-3 defensive end and their responsibilities are just as unrelated. Like the nose tackles, the ends primary job is to occupy blockers and allow the linebackers to roam free. Often times, especially in pass rush situations, they're try tie up the offensive tackle so that the rushing OLB can be isolated on a back or tight end. Ends won't get doubled as much as the nose will, but they will have to deal with them from time to time.

Ok, maybe that makes sense and maybe I was just babbling, but I hope it made some sense. It'll be interesting to see how close the Cardinals defense is to a true 3-4 in 2009 or if it'll still be a confusing 'hybrid' system, but we'll likely have to wait until training camp to know for sure. So did all of that make any sense? What do you think of how our defensive line would look? Do they have the right personel to run a 3-4, at least as far as the defensive line is concerned?