Share All sharing options for: State of the Arizona Cardinals Roster: Centers

Our 'State of the Roster' breakdowns shifts from the defensive side of the ball to offensive side and we'll start deep, deep in the trenches with the pivot man. The Arizona Cardinals opened camp with a veteran starter who was recovering from off season surgery and an undrafted player entering his second season after a promising rookie season. As we all remember though, Al Johnson needed yet another surgery and was placed on IR before the season even started. Questions abounded whether or not Lyle Sendlein was ready to become the starter but how did things turn out?

Disclaimer: The very last thing you'll ever hear me claim is that I'm well versed at scouting offensive lineman. I watch the games like everyone else, and will try to keep a close eye in the trenches at times, but feel free to weigh in with your analysis or arguments. 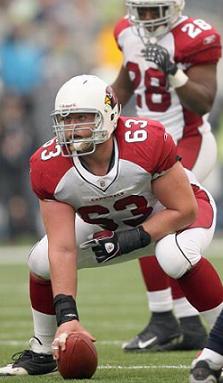 2008 Analysis: Sendlein was tagged as the center of the future heading into the season but before camp ended, he became the center of right now. Al Johnson never recovered from off season knee surgery and Sendlein started every game from the preseason opener to the Super Bowl. He's was great in his first season as a starter but you can see why the coaching staff was raving about this undrafted rookie out of Texas last year. He had problems with big, physical nose tackles for most of the season and he isn't the best in-line blocker but he's mobile and excels at getting to the second level. He's quick enough to be a factor on screen passes and draws as well.

2009 Outlook: Sendlien will no doubt be resigned in the off season and he length of his contract should tell us how the coaching staff views his future. He still needs to add some weight to his frame (6'2 300) and get stronger to handle the bigger defensive tackles, but he should open training camp as the starter. As young as he is, he should still be getting better with every game.

2008 Analysis: Peters was signed in April of last year and was supposed to just be an insurance policy but he got injured very early in camp and was placed on IR which effectively injured his season.

2009 Outlook: Peters is a 30 year player who hasn't played in an NFL game since 2003 and has only been in seven games in his entire career. I highly doubt the Cardinals bring him back and I'd be surprised if he's in anyone's camp next August.

2008 Analysis: Luckily Sendlein stayed healthy and Ross stayed on the sidelines. He didn't appear in a single game after being claimed from the Panthers after Peters went down. It's not clear whether Ross would have played if Sendlein had been hurt sometime during the season. Reggie Wells and Elton Brown both took snaps at center at various times during camp so Ross might have actually been third or fourth on the depth chart.

2009 Outlook: Ross' future is most likely tied to whether or not the Cardinals draft or sign a sign a center this off season. He's young but hasn't ever played in a NFL game since being undrafted in 2006. He'll most likely be in camp come August but I'd have think they'll bring in someone who is at least capable of starting in case Sendlein were to go down with an injury.

Overview and Needs: Sendlein stepped in and did an admirable job in 2008, but it'll be interesting to see if the front office tries to upgrade at center. Some consider Sendlein to be a young star in the making who should be bargain for at least the next several years (in fact our very own Boogatt might just be the founder and president of his fan club). Others still consider him just an undersized backup who will always struggle at the point of attack. At the very least, depth is a serious issue and someone will have to be drafted or signed to provide some insurance in case Sendlein gets injured. With that in mind, here is a wildly attractive crop of free agent centers:

There you have it, center is a position of need (at least for depth) and there is a laundry list of quality centers on the market and this is a great year for centers in the draft. In fact Darren Urban posted a story today about a center that many people think the Cardinals will target in the first round, Alex Mack. First things first though, how do you feel about Sendlein as a starter both in 2009 and the future? How high on the 'needs list' would you rank the pivot position? Would you want a free agent splash at center or would you rather wait and get a big name defensive player?