Share All sharing options for: Arizona Cardinals Rookie of the Year: DRC

The second Arizona Cardinals off season award goes to Dominique Rodgers-Cromartie for the Arizona Cardinals 2008 Rookie of the Year. He can add this award to his two CotW awards, here and here.  Like DbacksSkins said, DRC ran away with this one. He collected over 80 votes from RotB's readers and never looked back. His 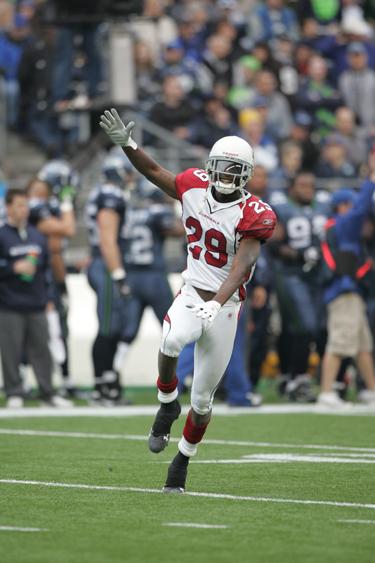 competition was Tim Hightower and Calais Campbell. Tim got a decent amount of votes but Campbell didn't stand a chance. DRC deserved a win for his regular season production and his hand in helping the Cardinals get to the Super Bowl.

DRC's production didn't begin until halfway through the season when he was finally named the starter against the San Francisco 49ers. He was said to have a high learning curve and displayed that as the season progressed. His speed and athleticism showed to be valuable, as he was able to regain speed and catch up to receivers at will. He was also capable of making plays on the ball, as he finished the year with 19 passes defensed and 4 interceptions. The 4 picks were a league lead among rookies, and Rodgers-Cromartie actually put up better averages in just four post season games. He finished the post season with 20 tackles, 9 passes defensed and 2 interceptions. Perhaps the biggest impact Rodgers-Cromartie had was his effect on other corner backs on the team. Roderick Hood and Ralph Brown changed their identity in the post season and played at another level. It could have been the motivation of a rookie out playing them that sparked their game play. DRC was outstanding throughout the playoffs and although he struggled in the Super Bowl to the eventual MVP Santonio Holmes, he showed flashes of being a "shut down" corner back in the NFL.

He knew what he was capable of:

This is pretty much a dream come true for a kid from Bradenton...They all said I was too small...I think they were just saying that because they didn't know who I was and they didn't think somebody could just sneak up like that.

Next season has high hopes for the soon-to-be second year pro. With a full season under his belt, he could put up monster numbers. Just take his last 8 starts of 2008 for example. If we multiply them by 2, his projected stats for the 2008 season would have been 58 tackles, 28 passes defensed, and 8 interceptions. That would've been a pretty stellar season for a rookie, and perhaps this is a preview for next year. The Cardinals have the possibility of bringing in a veteran to play along side DRC as well. Adding depth at the corner position is important to this defense. Only time will tell, and we can all hope that this years draft brings in another rookie to have a big impact in 2009.