Edgerrin James: Running Back for the (Insert Team Name Here)

Share All sharing options for: Edgerrin James: Running Back for the (Insert Team Name Here)

We all knew that Edgerrin James wanted out of Arizona. It's the same story: he was benched halfway through the season for a rookie named Tim Hightower, and only touched the ball 11 times from then until the last game of the season. At 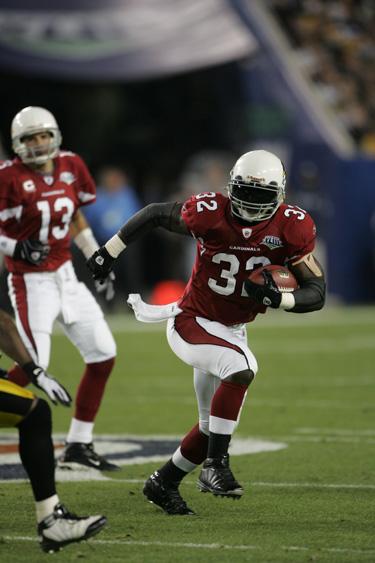 the time, he had asked to be released, hoping to join a playoff contender that needed a running back. The Cardinals refused to let him go, and everybody knows how that played out. He gained 100 yards the last game of the season to the Seattle Seahawks, and continued on through the playoffs. He was a well rested and healthy running back, and it showed as he was probably the main reason for the Cardinals success in the playoffs. Even though his numbers were not pro bowl caliber, the added element of a running game helped set up the pass, and almost led to the Cardinals becoming Super Bowl champions.

"They already lost their running back. They lost me in Week 8, 9 and 10, when they stopped playing me. I’ve been lost."

Then the season ended. Immediately after the season was over, Edgerrin James repeated his request to leave the Cardinals organization. Edge wants to play and it's obvious. He wants to add to his legacy, and build on his stats. There's absolutely nothing wrong with that, and he should feel that way. The Cardinals, on the other hand, are very short handed at running back. With J.J. Arrington set to become an unrestricted free agent, and Tim Hightower still raw at the position, the Cardinals cannot afford to part ways with James just yet. James still has a year left on his contract and could potentially remain a Cardinal for 2009. He still has the talent to be a starting running back. It only makes sense to let the Cardinals build on the running game that they had throughout the post season. Rod Graves already proclaimed that if Edge does want to leave the team, that it is in the best interest of the Cardinals organization to keep James until depth is established at that position. Graves stated that he would wouldn't release James before the free agency begins on February 27th. Or did he? According to James, the organization spoke with James' agent Drew Rosenhaus and agreed to release him once the season ended.

We had a clear, mutual understanding of where we both were at – that this was going to be my last year – so it shouldn’t be that big a deal. My mind is already set. It didn’t work, and it’s time for me to push on...I’ve been a professional during this entire situation, and it’s only right that they do the same. Instead of dragging things out with a player that’s not going to be around next year, why not let him go?

James does have a valid point. He was professional when he was benched, while still supporting the team and mentoring Hightower. Other then requesting to be released then, he was virtually silent. Edgerrin wanted to be released because he wanted to play, and that shows his desire for the game. Most players hold out or request to leave over money, or displeasure with the organization. In James case, he wanted to help a team in need. When he was put back in the starting role, he made the most of it, and played at a high level. James did indeed hold up his end of the bargain, so why aren't the Cardinals honoring theirs? This seems to be a trend in Arizona (See the ongoing Anquan Boldin saga).

They already lost their running back. They lost me in Week 8, 9 and 10, when they stopped playing me. I’ve been lost. Clearly, I wasn’t what they wanted. That was when I packed up my bags and shipped my stuff home...I never came to play in a passing system. I’m no scatback, and I’m not going to try to be one. I don’t train to be a scatback – I train to be an RBI hitter. I’ve worked too hard to build this style of play I’ve got, and it works. People say I can’t break off the big run anymore, but the funny thing is, when I won the rushing title (in 2000, with 1,709 rushing yards) my longest run was 30 yards. This year, it was 37. So have I gotten better?

That's harsh words from someone who usually seems to have a mellow attitude. The question that needs to be answered is, what do the Arizona Cardinals do with James? He clearly doesn't want to play in Arizona anymore and is ready to move on. When free agency begins, all teams with running back needs are going to be looking for one at that time, and that is the time when big paydays are given out.

From what Rod Graves has said, it sounds like they won't release Edge until after the draft. They are interested in young talent and may wait till then. That unquestionably isn't far to James, since by then, teams will not be willing to deal as much money and will only be looking to pick up running back support. One thing's for sure, if the Cardinals don't fix the running back situation now, they'll have bigger fish to fry once the 2009 season starts.