Share All sharing options for: State of the Arizona Cardinals Roster: Offensive Guards

Our trip around the Arizona Cardinals roster stays in the trenches as we look at the contributions of the offensive guards. We kicked off the offensive block party with the centers on Friday (which you can check out here) and the guards are another unglamorous position that normally only gets noticed when they don't perform well. We'll do our best to look at the whole picture though and peek into the looking glass for what 2009 will hold. Luckily for the Cardinals, the same two guys started every game at their respective guard position and there's definitely something to be said for continuity. 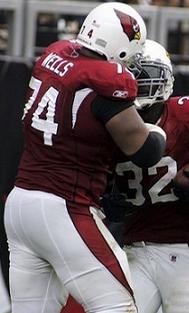 2008 Analysis: For the third straight season Wells started every single game and he remains the veteran stalwart on an otherwise young and inexperienced offensive line. He's one of the most consistent and respected players on the offensive side of the ball as evidence by him being voted a team captain this season. While Wells isn't great at any aspect of the game, he's an all around solid player who rarely makes the kind of mistakes that hurt the team.

2009 Outlook: Wells has been the rock on an offensive line that's changed around him almost every season and he'll be back as a starter for another year in 2009. He's not a Pro Bowl lineman and he won't ever be a household name but he's a classic overachiever who gets the job done without elite strength or athleticism.

2008 Analysis: Even though there were rumors that he was on the brink of losing his job all the way through training camp and at various points throughout the season, Lutui managed to start every game this season and has started 40 of the last 41 games at right guard. His biggest question mark is still his inability to play disciplined football and for the second season in a row, Lutui led all Cardinal linemen in penalties. In line blocking in the running game continues to be his strong suit, but he can get exposed in pass protection, especially when attempting to pick up a blitzer or linemen on a twist stunt.

2009 Outlook: Given all of the rumors about how close Lutui was to losing his job at numerous points during camp and the regular season (including very late in the regular season), it's almost impossible to know what his role will be in 2009. It's not out of the question that Brandon Keith, Levi Brown or even Elton Brown, if he's retained, could challenge Lutui during camp. It's also possible that the Cardinals draft a guard early enough in the draft that he can compete during camp. The bottom line is that Lutui may enter camp as the starter at left guard but the job certainly won't be handed to him.

2008 Analysis: At various points in camp, it seemed almost a forgone conclusion that Brown would eventually overtake Lutui for the starting left guard spot, but he could never quite break through and the health of each starter kept Brown on the bench for most of the season. He appeared in every game, mostly on special teams (field goals and such),  but he did get some snaps with the offense, especially late in the season. Down the stretch and into the playoffs, Brown started lining up as a tight end when the Cardinals really wanted to run the ball. The best example of that was late in the playoff game against the Panthers when the Cardinals ran the ball on 12 consecutive plays to kill the clock.

2009 Outlook: Brown's an unrestricted free agent so it's nearly impossible to project if he'll be back in a Cardinal uniform in 2009. I would think that he's looking for, at least, a chance to compete for a starting job. He's got experience at guard and tackle and he took snaps at center during camp so his versatility only adds to his value. The Cardinals would be lucky to have him back but they'll have to pay for his services because someone will give him the chance to start.

Overview and Needs: The Cardinals have had the fortune of stability, health and depth for the past three seasons at guard but that could all change in 2009. Will Elton Brown return? Will Lutui continue to be a starter? Who will be brought in to compete and backup? There have been more than a handful of murmurs Levi Brown or 7th round pick from 2007, Brandon Keith could move inside and compete for a starting spot. They've certainly got some questions that need to be answered and the changes could be drastic (Brown leaves and new starter for Lutui is brought in) or there could be none at all (Brown is resigned and Lutui remains the starter). We'll have to wait and see how the draft and/or free agency plays out. While the free agent crop for centers is this year is deep and talented, the group of free agent guards is very weak:

Overall I wouldn't be surprised to see a new face somewhere along the lines at guard during training camp. Whether that new face is drafted for just switched from another position remains to be seen, but it should be a interesting position to watch. Do you think we'll see some movement amongst the guards? Any guards in the draft that are particuluary interesting? Any current tackles that you'd like to see move inside and play some guard?