Share All sharing options for: State of the Arizona Cardinals Roster: Offensive Tackles

Our spin around the Arizona Cardinals roster lands on the offensive tackles today and they'll wrap up our look at the offensive line (here's the centers and guards). We'll move onto the skill positions later in the week but the tackles for the Cardinals are an interesting group for several reasons. Most of the intrigue might be purely fan-driven but we'll take a look at the whole picture. Before we get started though, I'll say that I don't think many of have a high opinion of either Mike Gandy or Levi Brown, but I also don't think that the Cardinals do very much to help them. When you watch other teams you'll see backs and/or tight ends helping out the offensive tackles, especially when they're facing elite pass rushers. For whatever reason though, the Cardinals choose, for the most part, to leave their tackles on an island. Maybe that's because they'd rather have as many guys in pass patterns as possible or maybe they just have a ton of faith in them. Sometimes it works and sometimes it leads to disastrous results. 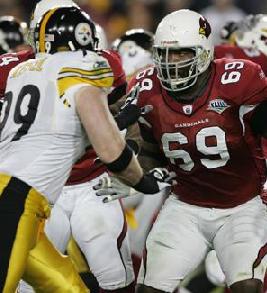 another good season in 2008 and has been one of the big reasons why the Cardinals offensive line has been somewhat stable over the past two seasons. He wasn't quite as good in pass protection as he was in 2007 but he's still an above average left tackle and a relative bargain considering his cap number is below $5 million.

2009 Outlook: Gandy wasn't a big name signing a year ago but he's certainly lived up to his contract in Arizona. He's not an elite tackle and he could be upgraded in the running game, but he's an above average blind side protector and that's important for the kind of offense that the Cardinals employ. One thing that's mentioned from time to time is that Gandy might be better suited to play guard and that he could eventually shift inside. He played quite a bit of guard for the Bears and Bills before coming to Arizona and if a quality replacement is found, either drafted, signed or developed, he could extend his career by moving to guard.

2008 Analysis: Brown is a polarizing figure in Arizona and he had another up and down season. At times he border-lined on very good (against the Redskins)and at other times he still looked like a heavy-footed big man who can't keep up with speed rushers (Jets game and the Super Bowl). He's pretty consistently good in the running game and has shown a surprising ability to get to the second level and pick up a block. Overall the best thing to say about his season is that he did improve from his rookie year.

2009 Outlook: Brown's entereing the point in his career where the potential has to turn into production. It's really as simple as that. Top five overall picks aren't allowed to struggle for very long and that's led to some speculation that he could also move inside to guard where his strengths (in-line blocking) would be magnified and his weaknesses (speed rushers) would be masked. Again that's pure speculation but one thing is clear, Brown's days of being a young, developing player are over. It's time to arrive.

2008 Analysis: After a promising camp and preseason, Vallejo made the opening day 53-man roster and was the primary backup to Gandy. Injuries forced him to the practice squad for a little while during the middle of season but he was brought back up after Clark Haggans was placed on IR.

2009 Outlook: Vallejo will be one of the wild cards heading into training camp. He's been in the the Cardinals system and under Grimm's tutelage for two seasons and a strong training camp could allow the Cardinals to experiment with the offensive line, including moving Gandy inside. Vallejo showed during the preseason last year that he is capable against speed rushers and if can continue to progress as a run blocker, he could make things interesting in 2009.

2008 Analysis: Keith had a surprisingly good training camp and preseason as well and the coaching staff raved about his abilities. He was a seventh round pick last year but most agreed that he had to tools to be a solid player in this league and he's done nothing to disprove that theory. Whisenhunt bragged that he had the ability to play both tackle spots and inside during camp but five healthy starters kept Keith on the sideline for the entire season.

2009 Outlook: Keith, like Vallejo, will push for playing time in 2009. Whether he pushes at tackle or guard, is still unknown but he provides the coaching staff with more flexibility and his size (6'5 343) and physicality could be an upgrade in the running game.

Overview and Needs: I'm sure that if you ask ten fans how they felt about the tackle position, you'd get at least eight different answers. They could be completely set with Gandy and Brown as starters and Vallejo and Keith as the primary backups. On the other hand Gandy, Brown and Keith are all candidates to move inside to guard and the starting combo could realistically be any two of the four. Gandy's also entering the final year of his contract so it'll be interesting to see if the Cardinals try to retain him or if Vallejo, Keith or even Brown are the future at left tackle. I wouldn't be surprised to see the Cardinals spend a second day pick on a tackle to develop or they could look to the free agent crop for depth or possible starter. If you're hoping they go the free agent route, here are some names to remember:

We all know how critical the offensive tackles are the overall success of an offense and that's why consistency and stability are so important to an offensive line. Gandy and Brown are certainly capable starters and the depth appears to be solid, but is a shake up needed to take the offense, and more specifically the running game to the next level? Who would your starting tackles be in 2009? Any of the free agent tackles interest you?