According the Darren Urban and Profootballtalk.com, the Cardinals have signed former San Francisco 49ers safety, Keith Lewis. It is supposedly a 2-year deal with, "a signing bonus and easily-reached incentives." Lewis has spent the last 5 seasons with the 49ers and is somebody we have grown accustomed to. The signing of Lewis is something else we have grown accustomed to...low-key players being signed in free agency. It happened last year and so far, Rod Graves has said it will this year. 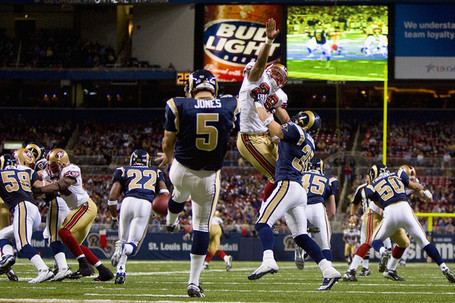 Lewis played in 76 games for the 49ers and started 13 of them. If you do the math, that means that out of 80 possible games, Lewis only missed 4. Health wise, he is dependable. Playing wise, he's not the cream of the crop. He is merely going to be a 3rd string safety, especially with the way Aaron Francisco plays. Darren Urban thinks it's interesting with the depth already at safety, but Francisco and Ware have disappointed Cardinals' fans once too many times. If this deal is real, it should be an interesting semi-headline through training camp, to see who gets the 3rd-string safety spot. Lewis is known for being a hard-hitting safety, and for his contributions on special teams.