Share All sharing options for: State of the Arizona Cardinals Roster: Running Backs and Full Backs

Our spin around the Arizona Cardinals roster is almost complete and we're in the backfield now looking at the running backs and full backs. In case you missed any of the previous breakdowns, check out the left hand column for links to each position. The running backs were a constant source of conversation throughout the season for various reasons including, should JJ Arrington be active or who should be the starting RB? In the end, the Cardinals finished with the worst running game in the league but was it the fault of the guys carrying the rock and is running back the biggest need heading into 2009?

2008 Analysis: We all had high expectations for James this season and there was even talk of him having his best season as a Cardinal. After a 100 yard performance to open the season we were sure he was going to have a great season, but then he averaged just 47 yards per game over the next six games. Then came the controversy that rocked the 2008 Cardinals as Edge was benched for rookie sensation Tim Hightower. Edge would carry the ball just eleven times over the next seven games, including three games in which he didn't even touch the ball. In the season finale he finally got a chance to carry the rock again and he responded with probably one of his best games as a Cardinals when he ran for 100 yards on just 14 carries, including his longest carry since 2004. Edge carried that momentum into the post season totaling 236 yards in the four playoff games.

2009 Outlook: At almost any point from mid season on in 2008, it was a foregone conclusion that Edge would be released as soon as the season was over, in fact he didn't even take the plane ride back to Arizona after the Super Bowl. As of this second though, James is still on the roster and the Cardinals have said that they won't release him until it's in their best interests. Basically Edge's future is still up in the air but he is expected to be released once the Cardinals add to their running back depth through the draft or free agency. 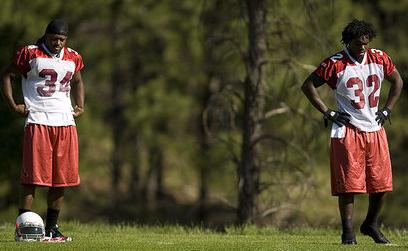 2008 Analysis: Hightower started making a name for himself with a strong training camp and impressive preseason. He opened the season as a goal line/short yardage back and excelled at the position with five touchdowns in the first five games. A couple of weeks later, he was named the starter and he exploded on the scene with 109 yards against the Rams, but he would struggle in every other game for the rest of the season totaling just 157 yards in the final eight games. Hightower would play a solid complimentary role in the playoffs totaling 132 yards (3.9 avg) and he'd add three more touchdowns.

2009 Outlook: There's no doubt that Hightower's future is bright and that he'll be a solid contributor for the Cardinals in 2009. What we don't know though is whether he'll be the starter, part of running back by committee or a complimentary back to another featured back. As long as he continues to work and improve, his tough, physical running style will command playing time.

2008 Analysis: Arrington had arguably his best season despite being inactive for the first four games and missing one game due to injury. He set new career highs in receiving yards, yards per rush and kick return average. The best thing you can say about Arrington in 2008, is that for the first time in his four year career he looked like an NFL player. He found his role as a third down back and was finally running with some authority instead of going down at, or before, first contract.

2009 Outlook: It'll be very interesting to see how the market responds to Arrington. He's got some undeniable talent but teams may see his career year as a 'contract year' performance instead of an actual resurgence. The Cardinals will try to retain him but they certainly won't break the bank for his services. 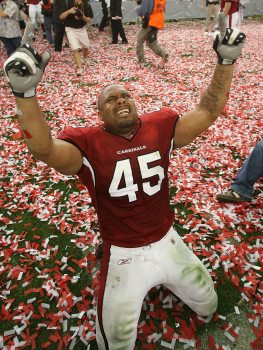 2008 Analysis: It's tough to gauge Smith's production because he's the quintessential blocking fullback who doesn't put his contributions in the box score.  He only touched the ball four times in 20 games but when the Cardinals needed to get a tough yard or two, Smith was leading the charge. His play was limited by the Cardinals 'air it out' offense but he still contributed to the success, small as it was, of the running game.

2009 Outlook: Smith is unrestricted and he'll be allowed to test the market but I wouldn't be surprised at all to see the Cardinals bring him back. Whiz loves these type of guys and soon-to-be 31 year old full backs don't command much of a salary. Much of the Cardinals interest though could be tied to what kind of offense they implement in 2009. If they continue to throw the ball 40 times and run 15 or 20 times, with half of those out of shotgun, then Smith may not have a role.

2008 Analysis: Castille's main contribution came on special teams where he ended the season with eight tackles. As long as Smith is in the picture and the offense is in 'spread mode' they don't have a great use for a versatile fullback like Castille.

2009 Outlook: Castille is young, cheap and useful so he'll be back. He can help a team in several ways including special teams and possibly even as a goal line back, but he's got to be hoping that Smith signs elsewhere in 2009. The Cardinals carried two full backs on the roster all season long and I can't see them doing that again.

2009 Outlook: Green was signed to a futures contract earlier this month after being out of football in 2008. He was a running back in college but played full back for the Ravens, even starting seven games between '05 and '06, and his size (5'11 251) screams lead blocker. His future with the Cardinals or contributions to the 2009 team are a complete unknown.

Overview and Needs: We identified running back as the biggest off season need of the Cardinals earlier this month and it's pretty clear why. They need to not only add depth but upgrade the overall quality of the position as a whole and it may take more than one player to do that, especially if Arrington leaves via free agency. With that in mind, here's a list of free agent backs:

Guys who carry the rock are always fun to talk about so here's your chance. How would fill out the running back corps? Draft one or two? Sign one or two? Keep who we have? Would you prefer a designated starter and backup or are you a runningback-by committee guy?