Arizona Cardinals Offensive Free Agents: Who Should be Re-Signed?

Share All sharing options for: Arizona Cardinals Offensive Free Agents: Who Should be Re-Signed?

The Arizona Cardinals have their share of unrestricted free agents on both sides of the ball this off season and we looked at the defensive free agents earlier in the week. That of course, leaves the offensive side of the ball for us to shift through. The guys on the offensive side are quite as noticeable as their defensive mates, with the one obvious exception, but there are still some critical decisions to be made.

Kurt Warner - The biggest name by about three miles is Kurt Warner, aka Grey Beard. He put up, arguably, the best season ever by a Cardinal quarterback and he topped the season off by having a spectacular playoff run that culminated in the franchises first Super Bowl. Warner was an MVP candidate for most of the season and was primarily responsible for the fueling the team's high octane offense. So what's the problem? Why hasn't a deal already by signed?  Well Kurt wants a dump truck full of money and he's not hearing any of the "well you're about to be 38 years old" talk. He has stated that he really only wants to be in Arizona if he plays in 2009 so the pressure in on Graves to get this deal done. How high the final number will be is the question....

Prediction: Kurt re-signs a two year deal worth $25 million, but $15 is paid in the first year and just $10 in the second. 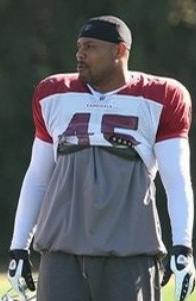 Terrelle Smith - Ah the sledge-hammer known as Terrelle Smith. The true, blocking full back is a dying breed, but Whisenhunt is very fond of the power running game that suits Smith's style. He's a bruiser who doesn't want the ball, just contact. The problem is though is that the Cardinals offense isn't built for a power ground game and Kurt Warner isn't being re-signed to quarterback a team that runs a Power-I. Smith is a valuable commodity but not to a team that runs more out of a shotgun formation instead of an I-set.

Prediction: Smith signs a two year deal worth $1 million per season with a team trying to establish a ground game.

J.J. Arrington - Arrington had a solid season and finally looked like a reliable NFL back. He's still young (26) and extremely quick and fast but the Cardinals have to decide how much they're willing to pay for a guy who underachieved for three seasons and then broke out in a contract year. If they believed that he truly turned a corner, then he's worth a decent contract and could be a big part of their future. With Sproles receiving the franchise tag, Arrington jumps to the forefront of quick free agent backs who can also return kicks.

Prediction: Arrington signs a four year deal worth $11 million total, elsewhere after turning down a modest offer from the Cardinals.

Elton Brown - Brown's a versatile backup lineman who didn't get a chance to prove himself this season because the top five starters were healthy all season long. He's had playing time at guard and tackle, which will drive up his price in free agency. He's waited around for a chance to compete for a starting job and he's probably looking for that opportunity in free agency. For the Cardinals to retain him, they'll probably have to promise him a serious chance to compete for Lutui's job as well as give him a pay raise. They've seen him in practice for four seasons so they know exactly what he can and can not do well. In the end, he might be too valuable to let go.

Jerame Tuman - Tuman suffered through an injury ravaged season and couldn't ever get on track. He's about to turn 33 years old and has played in a total of nine games over the past two seasons. His time in Arizona is most likely done and he might be on the verge of retirement.

Prediction: Tuman signs a one year contract for the veterans minimum elsewhere but gets cut at the end of camp. He announces his retirement but the Cardinals come calling around mid season after Pope and Patrick 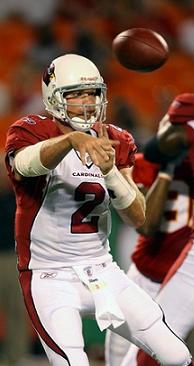 are both nursing various ailments.

Brian St. Pierre - At some point the prospect label has to be removed and you're either a player or you aren't. That point could be fast approaching for St. Pierre. The 29 year old has appeared in one game during his six year career and it may be time to find a young guy to develop as the third QB. If the Cardinals don't resign him, his NFL days could be over as they were the only suitor last off season.

Prediction: St. Pierre signs a one year deal with a team like Chicago, St. Louis or the Jets but doesn't make it through training camp.

Scott Peters - Peters is a 30 year old center who hasn't played in a game since 2003 and he's coming off an injury his season on August 1st. Peters will likely have to wait around and see if a team gets a rash of injuries during camp.

Prediction: Peters waits by the phone during camp but no one calls.

Ben Graham - The Cardinals picked up the Aussie punter off the scrap heap after he was cut by the Jets. He finished the 2008 season with decent numbers but still won't command much attention on the open market. The Cardinals will likely bring him back but also bring in some competition during camp.

Prediction: Graham re-signs on a two year deal for the veteran minimum.

As I'm sure you all know, the free agent flood gates open tonight at midnight (or 10pm AZ time) so tomorrow should be an interesting day. For now though, who would you keep? Who would say "See-Ya" to? Care to guess the contracts?