Less that one month ago, Kurt Warner led the Arizona Cardinals on an improbable playoff run that culminated in the franchises first appearance in the Super Bowl, but 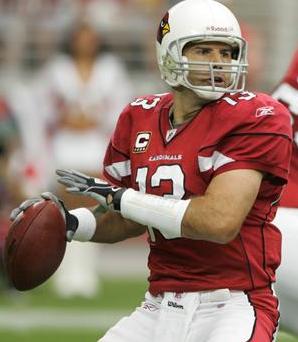 today they are a phone call away from losing Kurt Warner. The two sides could not agree on a new contract in the 26 days between Super Bowl XLIII and the start of free agency. According to Warner's agent they're looking for a contract that matches his production on the field, which is in the neighborhood of the top five paid QB's ($14.65 million). The Cardinals are offering something closer to $10 million per season. Only time will tell how this stalemate plays out, but who actually has the leverage?

Kurt Warner Holds the Cards: This offense is built for 'ole Grey Beard and he's the only quarterback who can operate it to perfection. If he retires or leaves, some of the pressure to sustain success would shift to the defense and running game, which ranked 28th and 32nd respectively in 2008. The Cardinals would also get blasted by the national media for being cheap and not rewarding their best player, who was vastly underpaid under his previous contract.

The Cardinals Have the Upper Hand: The Cardinals are in a unique situation because they've got a talented, yet largely unproven quarterback waiting for his chance to take the reins. They've also got to weigh the options between paying Warner nearly $15 million or using that money to sign other free agents to shore up their defense or running game. They believe they've made a fair offer and that it more than reflects his market value. So the waiting game begins.......but what is his real market value?

Warner's got two things working against him when he sits down at the negotiating table: age and his injury history. Obviously teams are going to sign him to a long term deal but Warner still wants 'elite money' for two seasons. At 38 years old (his age at the start of next season) many wonder when his physical skills will start to diminish. He also has an extensive injury history in his eleven year career and has yet to play 16 games in consecutive seasons. Whether or not he can find a suitable team to pay him $14 million per season should be very interesting. Mike Sando recently posted a story about his perceived value and it wasn't quite so flattering:

The Cardinals are reportedly offering around $10 million per year.

Kurt's biggest problem could be a lack of potential suitors. There are several teams that need a quarterback but he's already stated zero desire to be part of a rebuilding project and he's never been the best quarterback at dealing with inclement weather. So who are the teams who might have an interest in his services? (to be on the record, I'm ignoring any team from the NFC North simply because of being in the North)

Since we're just spit-balling here, I'm going to narrow Kurt's potential suitors down to two teams: Texans and Bucs. The Texans might not be ready to give up on Matt Schaub and they've got they're own defensive deficiencies to shore up this off season. The Bucs are an interesting team that would make some sense, but they just dumped several big name veteran players so they might not be in the position for a big free agent splash on a 38 year old signal caller. Basically after all this talk, the point is, Kurt Warner, most likely, isn't going to get a better offer in a better situation than he's getting from the Arizona Cardinals. The decision he's going to have to make is, does he want to play for $10 million or retire. The balls is in his court.....

One thing that I don't think has been mentioned is that Warner heading to free agency could actually lower how much the Cardinals have to end up paying him. Consider this, what if Warner recieves very medicore offers (as Sando's story alludes to) or worse yet, nothing at all? Would the Cardinals still have to offer $10 million per season. Maybe, but maybe not. Point is, this could actually turn into a positive, of course it could backfire as well, but that's the beauty of free agency.

Do you agree with what the Cardinals are doing or would you rather just play it safe and pay KW the $14.65 million? Do you think he'll get a better offer on the open market?