Karlos Dansby had a successful 2008, helped the defense throughout the playoffs, played in the Sup 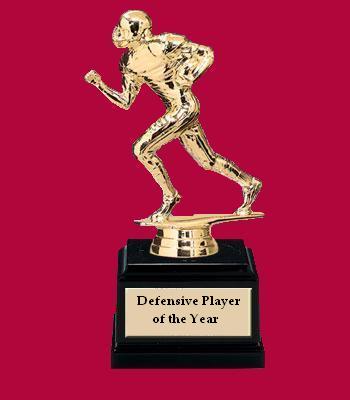 er Bowl, was named a Pro Bowl alternate, won a CotW in 2008, and now he has won RotB's Defensive Player of the Year Award (Enjoy the cheesy RotB Award I created to the left). This was one of the closest races yet, with Adrian Wilson and Dominique Rodgers-Cromartie coming up short.

Karlos Dansby is one of the most dynamic linebackers in the NFL and is extremely vauable to the Cardinals organization. Evidence of this is Dansby getting the Cardinals franchise tag for the second year in a row. CG broke down Dansby in his State of the Roster for the inside linebackers: 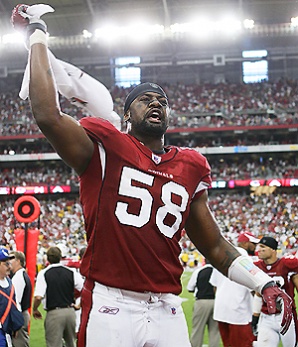 Dansby entered the 2008 season under a one year (franchise) contract knowing that he was basically auditioning for every team in the NFL and he responded with the best season of his career. Not only did he play a full season for this first time, he topped 100 tackles and was at his best when the Cardinals really needed him. He again showed the ability to make plays all over the field and his athleticism allows him to excel in pass coverage while also being a force in the running game. While some may argue, Dansby looked like the best defensive player on the roster for parts of the season.

He's young and has a very bright future. Dansby is on the rise and has the talent to become one of the most unique linebackers in the league. Dansby can play the pass, stop the run, and get after the quarterback. He's been regarded as the play maker of the defense. Hopefully he will become the face of the franchise and one of the more dominant linbackers in the NFL.