What Happened to Dominique Rodgers-Cromartie in Super Bowl XLIII?

Share All sharing options for: What Happened to Dominique Rodgers-Cromartie in Super Bowl XLIII?

Heading into Super Sunday the Arizona Cardinals had to have felt like they had an answer for Santonio Holmes. He had burned the Cardinals during the 2007 regular season (6 receptions for 128 yards and 2 TDs) because he was simply to athletic 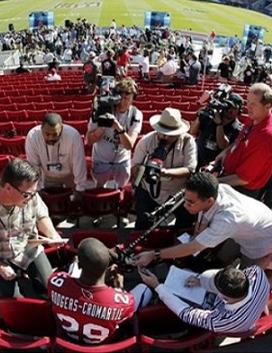 for any of the Cardinals corners to match up with him, but this time they had Dominique Rodgers-Cromartie. DRC was having a fantastic playoff run and he was a big reason why the defense had rebounded from a roller coaster regular season. He would certainly be able to match up with Holmes speed and quickness, or at least that's what we all thought.

Early in the game DRC looked like the kid that we've seen for the second half of the regular season and through the first three games of the playoffs. On the Steelers second series, he got deep just in time to break up a bomb to Nate Washington and he was half a step away from recording his third intercpetion of the playoffs. On their next drive, Ben Roethlisberger tried to get the ball deep down the sidelines to Holmes and DRC was there to break that one up as well. He didn't have the body control to be in position to intercept that pass but he showed the explosive closing speed to catch up to the ball and Holmes. Unfortunately, that was pretty much the last positive play that DRC made for the remainder of the game. It looked like he had decent coverage on Holmes for most of the game but he was just a half step behind him most of the time.

Maybe he finally hit the rookie wall, maybe the game was just too big for him, but either way he'll bounce back in 2009. What did you think of DRC's Super Bowl performance? Should he have been taken off of Holmes or was he not as bad as I remembered?