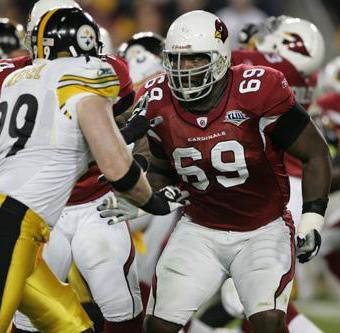 uch in the first three quarters, but what's the reason why? One of the top offenses in the league only registered 7 points in the first 45 minutes of play. Granted they were playing the best defense in the league but was it really the defense that affected their game plan? Gandy may have been doing the right thing in holding Harrison. The risk in letting Harrison go free around the egde could have been catastrophic. With Warner's history, it would be easy to predict the result. One might say that the penalties were results of an aggressive defense, but there could have been ways around them. Rather then putting the offensive tackles on islands, why not use a chip block? Edge is known as a dependable run blocker and could have been used to help the tackles more. The Cardinals also failed to use running back screens to counter the blitzes as well. J.J. excels at the screen and may have broken off a huge chunk of yardage. Nevertheless, some key plays and penalties truly slowed the Cardinals, and drastically took them out of their game plan. Here's a break down of all the Cardinals drives in the first three quarters and their final results:

As you can see, the penalties and mistakes cost the Cardinals several drives for the first three quarters. The poor play from the players could have been the main reason...but it also falls on the shoulders of the offensive coordinator Todd Haley. Here's a good example of some questionable play calling from the first drive of the game:

This is just the first drive and the poor field position was an obvious result of poor play, but why the calls on the last two plays? Running against the 2nd best run defense on 2nd and 20 probably wasn't the best call. To top it off, they ran a rather conservative screen that probably wouldn't have gotten the job done against that defense either. Why not throw over the middle to Boldin or a jump ball to Fitzgerald? When you're in the Super Bowl against a very good defense, you need to start off strong and clearly the Cardinals didn't. Here are some other interesting offensive stats from the first three quarters:

Why am I showing you this? Because if you think about what the Cardinals finished with, it makes the fourth quarter that much more special. The Cardinals more then doubled there total yards and first downs. It's a shame the Cardinals didn't play the way they did in the fourth quarter for the whole game. What's the reason behind this? Who's at fault, and what adjustments should have been made?