Share All sharing options for: Arizona Cardinals Put 2008 in the Rear View Mirror and Look Ahead to 2009

Being an Arizona Cardinals fan for so long, it's difficult to put the 2008 season to rest and turn our attention to the future. The season had it's ups and downs during the regular season, like any other, but it's culmination in a playoff berth and run to the Super Bowl is something that will live on in among Cardinals fans forever. Not only did the team surpass even our wildest expectations in the month of January but they did it in spectacular fashion. The defense bowed up and became the aggressive, ball-hawking unit that we've waited years for and the offense finally rolled out a balanced attack that simply overwhelmed opposing defenses. Yes, from January 3rd to February 1st the Arizona Cardinals made everyone forget about a life-long toil in futility and dared even the most casual fans to dream big. So how can we put such a magical season behind us and look to the future? The answer is simple, we have no choice. The upcoming off season will be the most important in franchise history and the 2009 team will face true expectations for the time in at least 30 years. With all of that in mind, here's one last look at the 2008 season, it's story lines, highs, lows, triumph and ultimate conclusion as well as glance forward to what the next six months will entail. 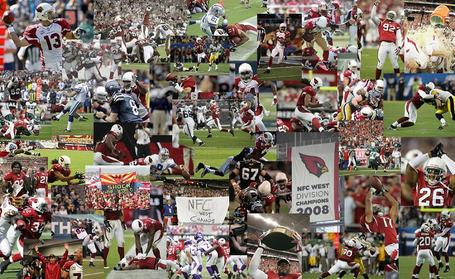 At the start of training camp, there weren't really any major story lines because there weren't supposed to be many pivotal position battles, outside of the third wide receiver or tight end or maybe free safety. Those battles played themselves out very quickly though and by the middle of preseason, the real battle started to heat up. Matt Leinart was named the starting quarterback almost as soon as the 2007 season was completed but Warner's competitive spirit wouldn't die.  Leinart was having a good camp and preseason completing 73.6% of his passes and throwing for 153 yards, a touchdown and zero interceptions through the first two preseason games, but then came a fateful day in Oakland. Leinart attempted 12 passes, completing four to Cardinals receivers and three to Oakland defenders. Rumors surfaced immediately after the game that Warner would be named the starter and even Whiz couldn't work make them completely go away. Warner would start the next preseason game and the next 20 games, including Super Bowl XLIII.

The Cardinals first month of the September would be microcosm of the rest of the regular season. They beat a division rival, San Francisco, on the road and then dominated the then-hapless Dolphins at home in a game in which Kurt Warner posted a perfect QB rating. The next two games were both on the east coast and both disappointing for far different reasons. The Cardinals lost a very winnable game to the Redskins to open the road trip and then laid an egg against Brett Favre and the Jets. That game was of course highlighted by the vicious shot that Boldin took at the end of the game. The Cardinals sat at 2-2 with two very important home game against seemingly formidable opponents at the time, the undefeated Bills and Super Bowl favorite Cowboys, before heading into a bye week.

The Cardinals the month of October by completely dismantling the Bills to the tune of 41-17 and the Bills, who were 4-0 coming into the game, would go on to lose eight of their next eleven games. Up next for the Cardinals was supposed to be their most difficult game of the entire season, no really. The Cowboys were everyone's pick to at least get to the Super Bowl and they rolled in the desert with a 4-1 record. The result was one of the most memorable regular season wins in franchise history and a renewed sense of confidence for the Cardinals. The game was book ended by special teams touchdowns, J.J Arrington kickoff return and Sean Morey's blocked punt. After a bye week, the Cardinals traveled to Carolina but again lost another close game on the east coast.

The month of November would be an eventful one for many reasons, including three division games, a game against the defending Super Bowl Champions and a Thanksgiving day contest. They started by changing up the depth chart at running back, inserting Tim Hightower as the starter and he immediately tore up the Rams. The next two game would be close contest against the Niners and Seahawks and two more division wins put them door step of a NFC West title. The upcoming two game though would damper the wild fire of Cardinal-love that was sweeping the nation. The Giants came to town and simply wore the Cardinals down while handing them their first home loss of the season. Just four days later the Cardinals would travel back to the eastern time zone and get embarrassed again. The Eagles simply destroyed the Cardinals on Thanksgiving day while the nation was watching and suddenly the roller coaster was back in a lull.

The month of December wouldn't do a whole lot to change the national perception of the Cardinals, although they did clinch their first division title in 33 seasons. The entire month was basically the Cardinals beating down two more NFC West opponents and getting rocked by the Vikings and Patriots. Thankfully though the month of December gave way to best month in the long history of the Arizona Cardinals.The Cardinals entered the playoffs being billed as the worst playoff team ever and they answered their critics by beating the Falcons, Panthers and Eagles en route to their first ever Super Bowl appearance. In the end the Cardinals dream season did culminate in a Super Bowl title but that by no means classifies the 2008 Arizona Cardinals as a failure.

The pressure to keep ensure that this season wasn't a fluke now shifts to General Manager Rod Graves and the rest of the front office. The Cardinals have several key free agents, including their MVP-caliber quarterback Kurt Warner and Pro Bowl level linebacker Karlos Dansby. They'll also have to make decisions on other starters and key contibutors like Antonio Smith, Leonard Pope, J.J Arrington, Bertrand Berry and Terrelle Smith. As if that's not enough for one man's plate, guys like Anquan Boldin, Adrian Wilson and Darnell Dockett want new contracts. All in all, the 2009 off season of the Cardinals will be critical for the future success of this franchise and should be wildy entertaining to talk about over the next four to five months. What will you lasting memories of the 2008 Arizona Cardinals be? What are your early expections of the front office and the team in 2009?