Anquan Boldin to the Arizona Cardinals: "I Don't Think the Relationship Can Be Repaired"

Share All sharing options for: Anquan Boldin to the Arizona Cardinals: "I Don't Think the Relationship Can Be Repaired"

Apparently winning doesn't solve every problem. Anquan Boldin isn't backing off his desire to leave the Arizona Cardinals. He's in Hawaii soaking up the sun with team mates, Kurt Warner, Larry Fitzgerald, Adrian Wilson and Sean Morey, but his mind is not thinking happy thoughts. Following a practice at the Pro Bowl in Hawaii, Boldin had this to say to USA Today:

"I don't think the relationship can be repaired with the 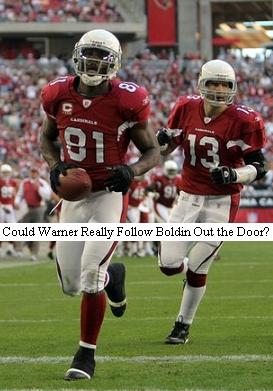 organization," Boldin told USA TODAY after Thursday's NFC practice for Sunday's Pro Bowl. "It takes more than, 'Well, we did you wrong and we'll pay you this.' It's not about the money. It was always about the principle. Guys being true to their word. I guess I was expected to uphold my end of the bargain, and it wasn't reciprocated."

But will he ask for a trade?

"I'll deal with my agent and see what we have to do," he said, referring to representative Drew Rosenhaus, who declined to comment when contacted. "But my feelings won't change."

His teammates don't seem to share the same sentiment though. Larry Fitzgerald interrupted the interview to say, ".....you'll be back, you wouldn't look good in any other uniform." One thing though that I haven't seen mentioned anywhere else is that Boldin's situation could effect Warner's decision and Warner might wait to see how that situation plays out. He alluded to that theory when he said:

"It's too key to our success to let Anquan go," Warner said. "I don't know if I'm leaning either direction. But (Boldin's situation) is going to be a key piece to it, whether we can do something as a team like this year.....If we can keep that together, that excites me about the possibility of coming back. If not, there will be a lot of struggles to overcome that'll make it harder."

Obviously Rod Graves will have his hands full this off season and it doesn't appear that he'll be able to take any time off. This will likely be a story that we'll follow for the next several months, but I still think that it will all be solved by a big contract. Money almost always trumps principle and the Cardinals have plenty of cap room. The news that Kurt Warner might not make his decision on retirement until Boldin's situation is resolved is disconcerning. Maybe his first ROTB's Arizona Cardinal of the Week award will be enough to convince Warner to come back. How do you see this playing out? Is your decision different if Warner is playing the 'wait and see' game?